I see you all are still in top form!

Yuffie is a supportive character, a member of the Hollow Bastion Restoration Committee, and a close friend of Leon, Aerith, and Cid. She travels with Leon, whom she often refers to by his real name, Squall—this usually causes annoyance on Leon's part. She sometimes refers to herself as the "Great Ninja Yuffie", wielding a large Fuma Shuriken as her weapon.

Yuffie is hyperactive, but tires out easily due to her high energy and quick movement. She is hard-working and determined, set on repairing her home of Radiant Garden and aiding Sora in his campaign against the Heartless and other foes. During the ending sequence, she tries to hand an ice cream cone to Cid but is interrupted by the Gullwings. She is usually friendly, cheerful and mischievous. She is, however, lacking the original's signature traits of sneakiness and selfishness.

Yuffie's appearance in Kingdom Hearts resembles her look in Final Fantasy VII, though she lacks her leg brace and arm guard. Yuffie has short, black hair and wears a metal headband with two green tassels. She wears a yellow scarf (which was never present in her Final Fantasy VII designs; it is a leftover from Rikku, who was originally to fill Yuffie's role), a green tube top two blue belts holding it up (as opposed to her original turtleneck), tan short-shorts with another loose, blue belt around her waist, white socks that reach about mid-thigh, orange shoes, and mesh sleeves on her arms that disappear into orange, fingerless gloves with black bands constricting the ends. She is also seen wearing this outfit in Kingdom Hearts Re:coded.

In Kingdom Hearts II, Yuffie's appearance changes to match her look in Final Fantasy VII: Advent Children. Her eyes are violet in this game, as opposed to the blue-grey they were in the first game. Yuffie switches her original forehead guard for a regular black headband with white lining. She wears an unzipped, dark grey combat vest with a black strap dangling from the right pocket overtop a navy blue tank top with white floral designs. She wears a white wristband on her right wrist and a grey, fingerless glove on her left arm. Her shorts are slightly darker and have another black strap dangling from the left side. Yuffie also wears black, knee-high socks with white stripes at the top underneath dark tan boots that are slightly shorter than her socks. In both of her appearances, Yuffie uses her 4-Point Shuriken from Final Fantasy VII as her weapon.

Yuffie lived in Radiant Garden along with Aerith, Leon, and Cid. Maleficent took over her world with the Heartless nine years before the events of Kingdom Hearts, and since then, she has lived in Traverse Town with her old friends.

Sora's first meets Yuffie in Traverse Town, shortly after he is defeated by Leon and dragged back to the hotel. As he is still only semi-conscious, Sora mistakes her for Kairi and refers to her as such, leading Yuffie to remark that Leon "might've overdone it". Yuffie does not play a significant role in the story, but she, along with Leon, told Sora about the Keyblade while inside the Traverse Town hotel.

In the fight cups at Olympus Coliseum, Yuffie is fought numerous times by herself and alongside Leon. She fights primarily by throwing small shuriken and swinging her larger one as a weapon, but she is also able to recover lost health if she is not interrupted.

Modeled after the real Yuffie based on Sora's memories. She doesn't remember Sora, but Sora's heart makes her remember, which she classes as strange yet convenient.

Yuffie is featured more prominently in this game than the previous two, appearing in her Final Fantasy VII: Advent Children attire. She is the first person to meet Sora as his party enters Hollow Bastion and leads them to Merlin's house. There, she introduces the familiar friends from Traverse Town and the Hollow Bastion Restoration Committee.

She explains about the town's defense system to Sora, Donald and Goofy and, later on in the game, fights alongside Sora in the Ravine Trail during the Battle of the 1000 Heartless. Once she and Sora clear the area of enemies, she leaves to assist Leon and the others. As in Kingdom Hearts, she is available to fight in the tournament cups in the Underworld at Olympus Coliseum. When the gang arrives in Hollow Bastion in the manga she calls Donald and Goofy, "Ronald and Zoofy".

After Data-Sora collects every Ending Card in Castle Oblivion, Data-Roxas allows him to open the final door and learn the truth behind the hurt. Right as Data-Sora moves to open the door, illusions of Leon and Yuffie appear to congratulate him for keeping Traverse Town safe, explaining that something urgent came up that they had to deal with. They express a wish to someday work alongside him, and give him a Debug Device: Y and a Heat Sink Belt before departing.

Yuffie Kisaragi originally debuted in Final Fantasy VII as one of the two secret characters that could be recruited to the party if certain conditions were met, though she later on joins the main cast in the Compilation. A ninja born in the western continent, Wutai, Yuffie loves her life hunting Materia, having developed an obsession with it early in her childhood.

In Final Fantasy VII, her original purpose for joining Cloud on his mission was to steal his Materia, which she succeeds in doing in the Wutai sidequest. However, she later dedicates herself fully in the mission to save the Planet. 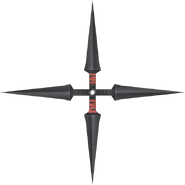