View source
watch 02:58
No Man's Sky Update - The Loop
Do you like this video?
Play Sound
Article incomplete
This article is incomplete. You can help the Kingdom Hearts Wiki by adding Mirage Arena Stats..

Don't expect these crafty condiments to hold still; you'll need to lock on if you want your blows to connect. Use Blizzard attacks to chill them out. Also, don't be that guy (or gal!) who gets slammed by an electrified Yellow Mustard. It's so difficult to explain to friends.
Blue Sea Salt
Red Hot Chili
Prize Pod
The Yellow Mustard is an Unversed that is found in Kingdom Hearts Birth by Sleep and Kingdom Hearts Birth by Sleep Final Mix.

A Yellow Mustard is a large creature resembling a gold pot. Its lid is dark brown with a small, conical, faded orange spike on it. The base of the pot is also dark brown, with two short spikes on it. It has a short, gold, lightning-bolt shaped "wing" on either side of its body. Its large, red eyes are set in an angry expression. The Unversed emblem is on its back.

In Kingdom Hearts Birth by Sleep Final Mix, the Yellow Mustard receives a recolor that gives it a lighter golden color.

Like the Blue Sea Salt and Red Hot Chili, the Yellow Mustard is named after a color and a food.

The Yellow Mustard wields the element of Thunder in its attacks. It will either cast Thunder from a distance, or ram players with its electrified body. It can be swatted down with aerial attacks to stun it, or the player can attack from a distance with Shotlocks. 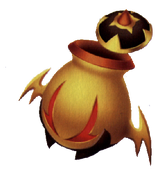