The World That Never Was

Feed your anger! Only anger will keep you strong.

Xaldin, the Whirlwind Lancer (旋風の六槍, Senpū no Rokusō?, lit. Six Lances of the Whirlwind), is the Nobody of Dilan, and Rank III of Organization XIII. He controls wind, and uses his power over the air to freely manipulate his six lances without holding them directly. He commands the Dragoon Nobodies, and has the second highest throne among the Organization.

Xaldin appears in Kingdom Hearts II as a villain in Beast's Castle, and spends his time in the game attempting to plunge Beast into despair in the hopes of turning him into a Heartless and thus creating a Nobody. He is also the only member of Organization XIII to fade in a Disney world.

Xaldin is a playable character in Mission Mode in Kingdom Hearts 358/2 Days.

Xaldin is a high-ranking and independent Organization member, working alone for the entirety of his presence in Kingdom Hearts II (sans his hooded appearance in Hollow Bastion). Xaldin acts sadistic and appears to revel in despair, attempting to cause hopelessness for Beast both in the castle and by taunting him and Sora during their fight. He is tall, strongly built, and very acrobatic, and his physical capabilities are greatly enhanced by his control of the attribute of wind, which he can use to move himself into a variety of attacks. Interestingly enough, some of Xaldin's in battle quotes and the delivery of his lines seem to give him a sense of indifference (emphasized by the fact that he will hold his arms behind his back in scenes, and even in battle).

His unpleasant personality is shown in Kingdom Hearts 358/2 Days, where he is sarcastic and impatient with Roxas during their missions together. He expresses a keen interest in the psychological weaknesses of his opponents, and how they can be exploited, explaining why he was given the task of turning Beast into a Heartless. This also shows during his investigation, where the only details he finds relevant are ones that show more about the personalities of those who live there (which he concludes with great accuracy, given his Nobody status). During his time at Beast's Castle, Xaldin is shown to despise the Beast's love for Belle, hinting that his heart may have been broken when he was a somebody.

He also seems to enjoy fighting opponents, a trait that is shown during the Dark Follower mission. As well, he disapproves of laziness, which is something he, when spoken to in the Grey Area, says he cannot stand. This disapproval is also implied when, during a mission with Roxas, he tells the younger Nobody "No breaks". In the Secret Reports, he writes that he has a contempt for beings with emotion, and that he desires a heart so that he may be able to do what only people with hearts can do; he has no desire to feel emotion. He has been shown to have an incredibly pessimistic side, stating that the power of love is stuff of poetry, not practicality, and that love never lasts.

Xaldin is a broad-shouldered man whose attire consists of a basic Organization black cloak, along with the usual boots and gloves. Xaldin's black hair is styled into distinctive dreadlocks that flair dramatically when he manipulates the wind. One of these dreads is used to tie most of the others into a sort of ponytail, while four thinner dreads dangle in front of Xaldin's face (two on each side). He also has bushy eyebrows and very thick sideburns, the latter of which hook around his cheeks, parallel to his violet eyes. Xaldin also has stretched earlobes, and wears hollow plugs with captive hoops within that run around his earlobes.

A data recreation of Xaldin can be fought during the New Organization XIII Event in the month of March.

Xaldin plays a minor role in Kingdom Hearts 358/2 Days. Present when Xion joined Organization XIII, he aided Roxas on various missions, particularly to Beast's Castle. It was on one of these missions that Xaldin witnessed the Beast's power, the quest in Kingdom Hearts II to obtain the Beast's Heartless and Nobody beginning at this point. Xaldin's plan grew during the continuous visits to the castle, as he learned the strong connections between the Beast, his rose, and the only human in the castle, Belle. He deemed that it was a spell that made the Beast what he was, and the rose and Belle were important to the breaking of this spell. Xaldin decided to use this to his advantage and his plan began.

Xaldin is present when Axel is ordered to eliminate Roxas after it is clear that Roxas has no intention of returning to the Organization, driving the order home by sending one of his lances into the backrest of Axel's chair, inches from his head. He is also present at a later meeting, breaking up an argument between Xigbar and Demyx, much to Luxord's disappointment.

Xaldin also appears with Xemnas, Saïx, Xigbar, Luxord, and Demyx at Hollow Bastion standing at the right of Xemnas. All he does in the confrontation is laugh emptily with the rest of the group at Xemnas's empty humor.

Xaldin's first major appearance in the game is as a cloaked and hooded figure during Sora's first visit to Beast's Castle. At this time, Xaldin has already drained Beast of much of his hope and kindness by convincing him that Belle is plotting against him. Beast is unresponsive to Sora, Donald, and Goofy when they first greet him, despite having met them before in Kingdom Hearts at Hollow Bastion. Xaldin's slippery words cause Beast to lock himself in his chambers and refuse contact with them or Belle.

Sora, fighting his way through the Heartless that have settled into the castle, eventually reaches Beast's bedroom. Xaldin tells Beast that Sora and his party are only there to help Belle against Beast, and that she has sent them to steal the rose symbolizing his curse from him with the intention of eventually taking his life. Beast, still under Xaldin's influence, attacks Sora as Xaldin flees, but Sora is able to bring Beast back to his senses.

When Sora and Beast head downstairs into the ballroom, they encounter the Shadow Stalker Heartless, which attack them. After being defeated, it evolves into the large Dark Thorn, but that too is no match for Sora, and is destroyed. Xaldin leaves the area without actually fighting them himself, stating that it wasn't over, but continues to lurk in the world until Sora returns.

Xaldin strikes again when Sora returns to Beast's Castle to find Belle and Beast having a private dance party. He captures Beast's rose and flaunts it in front of Beast, who goes into a rage and pursues Xaldin around his castle. Before Xaldin seems to disappear from the world entirely, he mocks Beast, taking off his hood and resolving to separate Beast's heart from him and take control of his Heartless and his Nobody. In Beast's anger, he rages at Belle for insisting on having the party. Despaired over the loss of his rose and his own beastly state, Beast orders Belle to leave the castle.

Belle shuts herself in her room, confining herself to looking out on the balcony. There she finds Beast's rose, and gladly signals to Sora from the balcony. The rose is just a trap, however, and Xaldin appears behind her, kidnapping her as well as retaking the rose. Xaldin flies down in front of Beast in his courtyard, taunting him by saying he can only carry either the rose or Belle along with him, and forcing Beast to choose which one he wants him to leave behind.

Before Beast has time to choose, however, Belle elbows Xaldin in the side and grabs the rose, taking the time from Xaldin's surprise to escape his grasp. Beast then attacks Xaldin, who leaps aside and conjures six long spears using his powers over wind. He then engages Sora and Beast on the bridge. Despite using his fearsome abilities to the fullest, he is eventually overpower and slain. Wincing in agony, he has no time for even a final word as he fades into the darkness.

A memory of the Organization XIII members that appeared before Sora in Hollow Bastion can be seen during Riku's dive into Sora's heart. Among the hooded figures in the memory is Xaldin.

Xaldin fights using six lances conjured from the wind. He can carry at least three at a time, and controls any of the lances he is not carrying by using the air around him, while at the same time floating through the air without much effort. He attacks rapidly, using the wind to hasten the speed of his strikes, and can use the Jump command his Dragoon Nobodies use, although Xaldin tends to jump multiple times and does more damage.

Although Xaldin is only the third Organization XIII member battled in Kingdom Hearts II, the fight against him was considered difficult enough that it was one of the ten battles in the game where King Mickey can rescue Sora if he is defeated (the other nine including the fight against Shadow Stalker and Dark Thorn, Xemnas (first armored form) and Cerberus). In fact, many fans have pointed out that only the fights against Xemnas and Sephiroth were harder.

In Kingdom Hearts 358/2 Days, Xaldin has a Limit Break called Dragoon Storm. During Dragoon Storm, Xaldin's swirls his lances around him in powerful bursts. Enemies that are hit take wind damage, and are pushed away from Xaldin.

During Xaldin's Final Limit, Xaldin can launch himself into the air, and come down with a mighty blow onto one enemy. Faithful to his name, this is a similar technique to the Jump ability that can be used by Dragoons in the Final Fantasy video game series.

Xaldin carries six Lances, called Lindworm. They, along with Xaldin's attacks and Dragoon Lesser Nobodies, are a reference to Final Fantasy's Dragoon Job Class. They are purple and blue, longer than six feet, each has the shape of the Nobody symbol, and one end resembles a Dragoon Nobody's "head" combined with the lower half of the Nobody logo. Xaldin only holds up to three at a time, and the rest float around him in the wind Xaldin commands.

Xaldin can use them to thrust from long distances, twirl them around himself as a form of defense, jump down on a foe with all six pointed downward, or have them grow and fuse into an enormous dragon that he rides on before firing a whirlwind from the dragon's mouth. Although, in Kingdom Hearts 358/2 Days, Xaldin lines up all six of his lances in front of him, in order to block himself, supposedly in the style of a barrier or wall.

Xaldin can also wield many other lances in Kingdom Hearts 358/2 Days, through the Mission Mode in which equipping him with different Gears provides different lances. 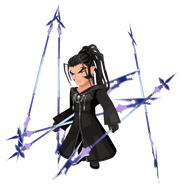