Ralph is a kind but soft big man who doesn't like the role of being a bad guy. He dreams of being a good guy rather than showing off his bad side when it's game time.

Ralph is a big, strong man with huge hands and messy brown hair. He wears a teal shirt over his Red overhalls.

For over 30 years, Ralph has been the bad guy in a game called Fix-It Felix Jr. and have been wrecking the building while being throwned into the mud after Felix does a good job. When he thinks the player is going Turbo, he tires to defeat it but was defeated later on. During the party, Ralph decides to prove to Gene and the others that Ralph can get a medal and he goes that by leaving the game and into Hero's Duty, where he takes the medal from the top of the beacon tower. However, one sudden accident sends Ralph out of the game and into Sugar Rush, only to have his medal stolen by a little girl named Vanellope.

Ralph appears in Kingdom Hearts III as a Link summon for Sora. When activated, he falls through a Fix-It Felix Jr.console before rising up with Sora on his shoulders. His ability, 8-Bit Blast, consists of generating platform blocks he can jump on and explode into 8-bit pieces upon smashing them, damaging enemies nearby. He can also charge enemies before using his finisher. 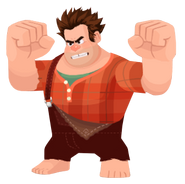 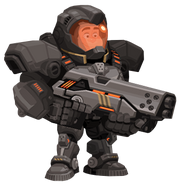