The World of Chaos is a massive flying Heartless warship that can be found exclusively as a boss in Kingdom Hearts.

Eventually, the heroes destroy the World of Chaos, and when Ansem calls upon Kingdom Hearts to aid him, he is obliterated by the light that sleeps within it. Riku's body is returned to him at this point, but unknown to him, it still contains the surviving traces of Ansem's heart.

The World of Chaos is a titanic battleship and easily the largest Heartless seen in the Kingdom Hearts series in terms of sheer magnitude. It seems to be almost, if not entirely organic and made of twisted, discolored flesh. It is primarily colored pink that fades into a sickening mixture of cyan, brown, purple, and yellow in various places. Two leg-like protrusions are attached to the battleship's underside. The foremost one, underneath the Heartless's face, is long, thin, and triangular.

The rearmost one, underneath the main core, is a wide, thin arc. A long, rocky "tail" sprouts from the World of Chaos's back. Its body is very long and flat on top and has two rows of discolored teeth lining it (making it resemble the inside of a person's mouth). Scattered along the World of Chaos's sides are bulbous patches of flesh covered in green-purple growths. Its face is on the front tip of its body, and its main core is located on top of its body towards its rear.

The World of Chaos's face is demonic, sporting a long, pointed chin, a thick jaw, and a bulbous, dark pink forehead covered with pale pink veins. Its mouth is filled with large, white fangs that protrude out, and the inside of its mouth is filled with purple, green, and dark blue veins, with a twisted mass of purple cords fused together for a tongue. Its small eyes are completely yellow and surrounded by black rings. Coming from either side of its jaw is a long, thick arm-like tendril colored pink with a blue flash. The World of Chaos's main core is covered by twisted, dark pink pillars and a transparent force field that form a protective cage.

On top of this cage are Ansem and his Guardian, both now titanic in size (though still small in comparison to the World of Chaos) and even more monstrous in appearance. Ansem has abandoned his clothes, with his only article of clothing consisting of an organic-looking, skintight material that covers his legs and feet and appears to be made of black muscle tissue. This material has dark yellow cords in it that outline darker, glossier patches of the material and the soles of his feet, as well as a long, hexagonal codpiece also outlined with these yellow cords. His eyes have turned completely orange, and he wields a large, dual-bladed halberd that resembles a dual-ended version of Riku's Soul Eater.

The Guardian's head is more demonic, with red rings around its eyes, its long, crooked antenna becoming a protective helm of large, flat, jagged black horns and a similar plating covering its jaw and back. The skin underneath this armor is blue-black and its exposed mouth is filled with sharp, white fangs and blue gums. On the Guardian's shoulders are two bulbous blue orbs. It has two narrow yellow "eyes" on its chest and two yellow tubes that wrap around its back, connecting to two red reptilian heads underneath its arms. Its arms have loose, ragged flaps hanging from them like cloak sleeves. Its torso is opened up, exposing its vertebra and a hollow, broken ribcage for Ansem to rest in while protected by the World of Chaos and his Guardian. A mass of thick, black-and-red, organic cords (which are conceivably the Guardian's entrails) extend from its open stomach and connect into Ansem's back. Its tail is fused into an orange hollow that appears to serve as a pilot's seat atop the cage. The main core of the World of Chaos is a bulbous, deformed, blue organ covered in violet growths of varying sizes. The most prominent of these growths has a faint silhouette of a skull on it, with the eye sockets, nasal socket, and gaps in the teeth being white. Two smaller growths near the top of this main one are oriented in a way that resembles a Hidden Mickey token. The World of Chaos's various Room Cores are all circular and red with gray edges. They have small yellow spots placed randomly on them and have a thin, blue-green, teardrop-shaped additive floating above its tip and below its bottom.

The smaller of the World of Chaos's two artillery organs are comprised of two jagged, blue tentacles with blue-white tips that clamp together. They are yellow on the inside and grown from purple bumps on the World of Chaos. The larger artillery organs are more ornate, being blue with turquoise additives and smoother edges. They are pink on the inside and grown from large, purple bumps with turquoise patterns on them.

The name of the World of Chaos represents the chaos and destruction brought to the worlds by the Heartless. The former part of its name could also be a reference to the immense size of the Heartless. 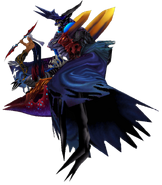 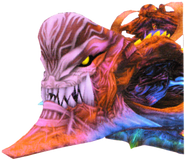 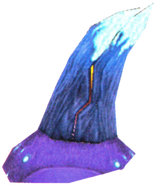