Woody Pride is a Party member that appears in Kingdom Hearts III.

"Yeah, I am a toy. And a friend. My guess is no one's ever loved you before. Because you know NOTHING about hearts and love."
—Woody to Young Xehanort

Woody is a smart, determined, passionate, and loyal toy who would do anything for his nearest and dearest friends. He considers his friends as family and he tries his best to keep them together at all times. He is very attached to his friends and cares for their safety, especially Andy, his owner. His determination to find Andy was what led him to put his trust in Sora, Donald, and Goofy, far more than Buzz. Despite finding Young Xehanort splitting their world far-fetched, Woody is willing to give people the benefit of the doubt, even reminding Buzz of his own faults, such as when he believed he was a real space ranger.

When upset, Woody is shown to be very stern, such as ordering Young Xehanort to return Buzz to normal, then to get lost. This shows that he is willing to endure the hardest challenges without a hint of fear. Woody's bond with Andy and his friends is what allowed him to endure the darkness and free Buzz, stating that Young Xehanort is hollower than any toy. Hamm claims that Woody is always getting into trouble, showing that even he has his own faults.

Along with his friends Buzz Lightyear, Rex, Hamm, the Little Green Men, and the Green Army Men, Woody is taken away from his owner Andy and trapped in a replicated version of his world by Young Xehanort to experiment on the nature of their hearts. Woody joins his fellow toys on Andy's bed, as they prepare to take on the intruders that have appeared in Andy's room. They plan to spring upon the intruders on Woody's count; however, Buzz stops his friends, as three new toys, Sora, Donald Duck, and Goofy, have shown up.

The trio defeat the Heartless and introduce themselves. Buzz, suspicious of the newcomers, demands Sora tell him where he had fought the Heartless before. However, his interrogation is stopped by the others, who believe Sora, Donald, and Goofy to be Andy's newest toys. They plan to search Galaxy Toys for Young Xehanort.

At Galaxy Toys, Young Xehanort appears and summons Heartless to pilot the Gigas toys against Sora. The toys are split up and Woody helps to reunite everyone. Once all of the toys are recovered, they decide it is time for them all to return home. However, before they can leave, Young Xehanort appears once more, summoning a Marionette to possess Buzz, whose heart had been weakened by fear and doubt. Buzz turns his laser on Woody and attacks. Though Goofy, Donald, and Rex try to stop him, he disappears into a Corridor of Darkness. Sora and the others track down another dark corridor in the toy store, finding Buzz inside trapped in a column of darkness. Young Xehanort muses on the darkness in Buzz's heart, but Woody responds by describing the love between the toys and Andy. His connection to Buzz breaks the darkness trapping him. The darkness takes the form of the King of Toys, but Buzz regains his senses and helps Sora defeat it. Though the toys remain trapped in the alternate world for the time being, they remain hopeful of seeing Andy again and do not regret the chance to meet Sora and his friends, who have become a part of their hearts.

Some time after Master Xehanort's defeat, Woody is seen with the other toys in Andy's room as the door finally opens with Andy's return.

In the 1995 film, Woody is the beloved favorite toy of a boy named Andy. When Andy receives a Buzz Lightyear action figure for his birthday and begins to spend more time with it than with Woody, Woody becomes jealous and fears he has been replaced by the space ranger toy. He attempts to hide Buzz from Andy, and in the process, he gets them both lost and in the possession of Sid, the toy-torturer who lives next door. In Sid's house, Woody finally admits his insecurities to Buzz and a friendship forms between them. They team up to escape Sid's house and manage to make it back to Andy before he leaves them behind in moving to a new house.

During the development of Kingdom Hearts II, a model of Woody was created with hopes that a Toy Story-based world would be created. As Square Enix was not able to introduce the idea of using him in the series at the time, the model went unused.[1] 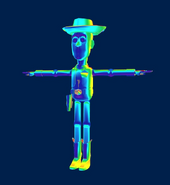