Wonderland is a world which first appears in Kingdom Hearts, and thereafter in many subsequent games. It is based on Walt Disney's 1951 feature film Alice in Wonderland. This world is nonsensical and bizarre in its own way. Houses that have foldable furniture, a tea party without any guests, and a forest of giant flowers are just some of the odd things found here. The world is ruled by the stroppy Queen of Hearts and her card-like soldiers.

Wonderland is the one of the few Disney-based worlds without a world-exclusive ally.

Wonderland is one of the first worlds Sora, Donald and Goofy travel to together after joining forces. They arrive just in time to witness Alice be put on trial for apparently trying to steal the Queen of Hearts's heart. Alice is sentenced to beheading, but Sora intervenes, promising the queen he shall bring evidence to prove Alice is innocent. While searching for evidence, Sora is helped by the Cheshire Cat, who also gives him the Blizzard element if he finds one difficult-to-reach piece of evidence.

Upon returning with up to four pieces of evidence that the Heartless were responsible, the Queen announces that she has her own evidence, which is added to Sora's and mixed up so it's impossible to tell which is which. She tells Sora to choose one, and only that evidence will be considered. If her evidence is chosen, Donald and Goofy are locked in a cage and unable to fight. If Sora's evidence is chosen, the Queen believes it to be a trick. Either way, she is furious, and locks Alice in a cage, turning her card minions upon Sora. The party defeats them and rushes to save Alice, but discovers her cage is empty. Sora and his friends rush off to find Alice, but after a search through the world, they return to the normal Bizarre Room and face off against the Trickmaster Heartless, which they destroy. They then discover the world's Keyhole in the sleeping Doorknob's mouth and seal it.

Sora intervenes and claims he is the thief which causes the Queen to have her cards attack. After fighting and having to flee, Sora and Alice talk to the Cheshire Cat about the Queen of Hearts and her memory loss. The Cheshire Cat also comments that "If you try too hard to remember something, your memory could lie to you."

When Roxas first arrives in Wonderland, he has another vision of that boy in red. He sees him standing where he is standing, holding a Keyblade. He is soon distracted by the strange sight of a white rabbit in a waistcoat looking at a pocket-watch and speaking of his lateness. Roxas is not quite sure what he has just seen, but wonders what might be up ahead to make the rabbit react so.

When he reaches the next room he sees the White Rabbit again, but shrunken, and running through the door. He wonders just how the Rabbit might have gotten smaller, and is answered by the Doorknob, who tells him to drink what's in the bottle on the table. Roxas drinks the contents of the bottle, causing him to shrink. Heartless appear, and he is able to continue with his mission of collecting hearts. After the defeat of a few enemies, a Lurk Lizard appears, but is defeated.

On his second mission to Wonderland he is sent with Luxord to take out some Pink Concertos. Roxas looks around, thinking to see the White Rabbit once more, but he does not appear. When Luxord questions him about his behavior, he tells him what had happened on the previous mission. Luxord tells him that even small happenings with luck could turn into fated meetings. Roxas looks confused, but they continue on with their mission.

During the mission the Cheshire Cat appears several times to give cryptic advice on where they might find the Heartless. Roxas asks him whether or not he is connected with the Heartless, but of course the Cheshire Cat would not give him a straight answer. On this mission he had several more visions of the boy in red, this time with his friends.

They follow the rabbit to the Queen's Court, where he tells the Queen that they have been unable to locate the trio that gave her a shock. She demands that they be found, and the card soldiers run to check the Maze Garden, the only place they haven't checked. Thinking that perhaps the "trio" the Queen is searching for are the three Heartless they have been sent to dispatch, Luxord and Roxas take a look at the Maze Garden as well.

The Card Soldiers are everywhere, but by sneaking by them they manage to find and finish off the trio of Heartless. Roxas has another vision of the boy in red, before they hear the Queen screaming at her soldiers. Luxord muses that now they’ll never find those three Heartless they had been searching for, and it was due to Roxas’s curiosity that they managed to find them before the soldiers did.

It isn’t until several months later that Roxas has his next mission in Wonderland with Luxord. The Queen is still looking for the trio of Heartless, but no one has yet to find them. Luxord wonders if luck will be on their side this time, when the Cheshire Cat appears to tell them of a new shadow that has appeared in place of the old ones.

He gives them a hint that they will find the shadow by turning on the four switches in the Opposite Maze Garden. They made their way through the garden, avoiding the card soldiers, to turn on the switches. Returning to the Bizarre room, the light now makes a shadow on the floor, which turns into the Novashadow that they had been sent to fight. They take care of it, and return through the Corridor.

A few weeks later, Roxas is sent by himself to take care of a unknown Heartless. But before he goes anywhere, the Cheshire Cat appears, and asks if he is looking for a Heartless. Roxas asks where he could find it, and the cat answers that it is in the room with the shadows. Roxas asks him what he wants, and the cat replies that it is whatever Roxas thinks that he wants.

Roxas gets irritated and moves past him into the next room, but as soon as he drinks from the bottle, the cat appears again. The Heartless springs from the shadow, but Roxas defeats them. And then the cat appears again to congratulate him. Roxas asks the cat who or what he is, but the cat only replies that he should believe whatever it is he wants to believe. That 'lies and truth are the same if you believe in them and that he should choose where his heart lies.'

Sometime later, Roxas is transported here by Xion in the Bizarre Room. Xion uses the Organization XIII Device to transform into a winged form, and she attacks Roxas. However, Roxas manages to destroy the wings. Xion then transports Roxas and herself to Halloween Town to continue the fight.

A data version of this world created from Jiminy's Journal appears in this game.

When Data-Sora meets Alice she says she cannot remember a thing, which leads Data-Sora to collect Inklings to help her regain her memory.

Data-Sora also confronts the mysterious Organization member in this world. Also, the Queen of Hearts sends her Card Soldiers to attack Alice and Data-Sora, and they run into the Cheshire Cat and Data-Sora fights the Trickmaster once again. The Data Keyhole in this world is inside the cage in the Queen's court.

When Sora, Donald, and Goofy first arrive in Wonderland they find themselves floating down a Rabbit Hole into the house of the White Rabbit, which is a large room with a hallway. The hallway leads to the main room, called the Bizarre Room, which has a table with "Drink Me" bottles which cause the drinker to grow or shrink in size. The Rabbit's furniture can be folded up into the walls or flattened to change the room's structure, reveal treasures, or open new doors. Different doors around Wonderland into the Bizarre Room cause the gravity to shift, allowing you to explore the walls and ceiling of the room.

Entering the door behind the bed leads to the Queen's Court, outside of her castle in a hedge maze. Here she runs her pointless court sessions, and is where the boss battle against the Card Soldiers is fought.

The way to the Lotus Forest is through the opening to the left. It is a large wood full of giant mushrooms and flowers which ask for potions and other items; one flower can be given a potion to make Sora grow larger. Various items that can be manipulated, depending on Sora's size, such as the stump, the boulder, and the tree in the center of the wood; knocking the nut from the tree and consuming it returns Sora to a shrunken state.

Finally, there is a small area that is the location of the Tea Party Garden, where the Mad Hatter and March Hare's tea party is laid out; the hosts themselves are imprisoned in a portrait on the wall, but sitting on the chairs around the table can grant prizes or penalties. The portrait also changes depending on the prize/penalty.

In Kingdom Hearts 358/2 Days, there is the Hedge Maze Entrance which is an annex between the Bizarre Room and the Queen's Court. On either side of the small hallway it leads to two Red Rose Hedge Mazes, giant mazes sometimes guarded by Card Soldiers, and, when not, are inhabited by Heartless. 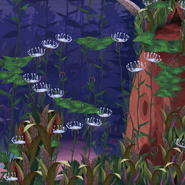