View source
watch 02:58
No Man's Sky Update - The Loop
Do you like this video?
Play Sound
Cleanup required
This article may need to be rewritten to conform to a higher standard of style, verification, or use of media. 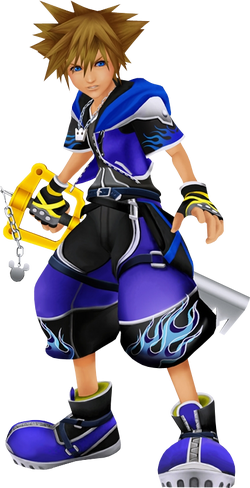 Wisdom Form is unlocked after completing Timeless River. In Wisdom Form, Sora specializes in magic, with all of his spells becoming more potent. In Wisdom Form, the Attack Command changes from 'Attack' to 'Shoot'. This enables Sora to target enemies and fire arrow-shaped magic bullets at them from great distances, as well as pierce frontal defenses (such as those of the Large Body or Fat Bandit; This is due to the bullets having Neutral-type damage as opposed to Physical). The strength of each shot is based on Sora's Magic Stat. In Wisdom Form, Sora glides along the ground, moves 40% faster, and his maximum ground combo is increased by 1. However, he cannot perform midair combos. Sora is able to use magic and items while moving. Furthermore, magic spells in Wisdom Form have extremely fast casting speeds.

Wisdom Form turns Sora's clothing blue and black, with blue flames on his pants and sleeves. The Wisdom Form is one of the two drive forms that wield only one Keyblade, the other one being Limit Form, which is only available in Kingdom Hearts II Final Mix. In any world while in Wisdom Form, specks of light hover around Sora's legs. There is also a blue magical mist surrounding Sora's feet that turns into two light blue wisps, one rising from each foot when Sora slides across landscape.

Sora's ability to slide across the ground covers his entire body with him sliding across the ground on his back during some combos. The only time Sora actually stands is when he lands from a jump. These wisps circle Sora in a manner similar to a double helix when Sora is stationary. Sora moves acrobatically in this form, spinning the Keyblade idly behind his back when not moving, and flipping around when shooting magic bullets. He also tosses the Keyblade into the air when he jumps, catching it when he reaches his height.

The official artwork shows Sora's sleeves with blue flames, but in-game the sleeves have the same design as the Master Form's. This seems to be a mistake, as Square-Enix changed the sleeves in Kingdom Hearts II Final Mix back to the original blue flames.

Wisdom Form as an item.

While Sora is able to hit targets at long-range due to Attack changing to Shoot, Wisdom Form's true strength lies in his spell casting; All magic spells can be performed while moving, execute faster, and have enhanced properties:

As a magic-focused Form, it is best to make the most of Sora's spell-casting by using Magic as often as possible, especially the Magic finishers which are enhanced due to the Magic Spice ability. Equipping Ethers and other MP-restoring Items is tantamount to making the most out of Wisdom Form. To increase the amount of spells the Form can use without Items, the player can equip either the Ultima Weapon (which has the MP Hastega ability) or the Circle of Life (which has the lesser MP Haste). Since the Wisdom Form already has the innate MP Hastega ability, equipping either or both of those Keyblades can increase Sora's MP restoring capabilities to staggering amounts. Wisdom Form gains one experience for every defeated Heartless. An important fact to note is that Mushroom XIII, despite being Heartless, do not give Wisdom Form experience.

A good place to level up Wisdom Form is at the Fragment Crossing in The World That Never Was, due to the extremely large volume of easily defeated Shadow Heartless that appear there. However, in Final Mix, the Shadows are replaced with various Nobody enemies. Other recommended options include the Chasm of Challenges in Agrabah (where one can utilize the nearby Save Point to refill the Drive Gauge) and the Timeless River Windows to the Past, particularly Mickey's House, where there are large congregations of low-level Heartless (Shadows and Soldiers) and a world exit nearby. A second option in Timeless River is to travel between the Pier and the world exit, extending the path to include both the Waterway and, eventually, the Wharf, as the Form Gauge increases. A combination of Magnet and Thunder will make short work of the enemies here, though Fire at higher levels is a lower-cost alternative. Oathkeeper is a great Keyblade to use, as it has the Form Boost ability, which makes the Drive Gauge last longer.

Another decent way to level up Wisdom Form is to play through the the Solar Sailor in Space Paranoids. While the Devastator Heartless can be annoying at lower levels, if Sora is still in Wisdom Form upon completion, the Drive Gauge will completely refill, therefore allowing the player to repeat the process.