View source
watch 02:34
Fire Emblem Warriors: Three Hopes - The Loop
Do you like this video?
Play Sound
Article incomplete
This article is incomplete. You can help the Kingdom Hearts Wiki by adding Mirage Arena Stats..

This simple-minded simian still packs quite a punch. Thankfully, its feet don't move much faster than its brain, so once the coast is clear, you can rush in, deal some damage, and escape before the monkey business resumes. Wild Bruisers home in on you when they charge; dodging works better thank blocking if you want to set up counterattack.
Bruiser
Buckle Bruiser
The Wild Bruiser is an Unversed that is found in Kingdom Hearts Birth by Sleep and Kingdom Hearts Birth by Sleep Final Mix.

A Wild Bruiser is a large, muscular, ape-like creature. Its body is predominantly brown, but its belly and chest are dark grey. Its forearms are massive and drag along the ground, its hands are black, and it wears a green and light green bracelet on each of its wrists. Its legs are relatively small and thin and its head is spherical. The Wild Bruiser's face is black and has two black horns jutting out of the sides of its head. It also has what seems to be a yellow banana peel on its head. Its red eyes are set in a happy expression and the Unversed logo is emblazoned on its belly.

In Kingdom Hearts Birth by Sleep Final Mix, the Wild Bruiser's skin is changed from brown to grey, its cuffs are changed to red and black and the belly and chest are made a very light chocolate brown.

Its name represents its immense physical strength and its wild, gorilla-like appearance

The Wild Bruiser mainly uses its strength to fight. It has three attacks: slamming the ground with its fists and causing rock to jut out of the ground, slamming the ground with both fists and creating twin shockwaves, or charging at the player. Its attacks can deal heavy damage. As mentioned above, a Wild Bruiser is hard to damage physically, so magic attacks are the way to go. Therefore, Aqua is the best character to fight this Unversed. Take note that Magnet nor Gravity magic will not lift it off the ground, but Aero magic can. Also note that landing a combo finisher causes the Unversed to drop its banana peel hat, leaving it stunned and open to more attacks. 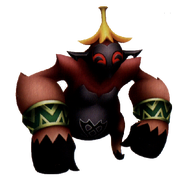