Heartless that mostly appear in Halloween Town. Their jerky, dancelike attack moves are fairly easy to dodge, but cause large damage.

A Heartless that calls Halloween Town its main haunt.
The Wight Knight's long appendages make it dangerous to approach.

It merely wanders around, but once attacked, it attacks persistently. Parry its attacks to ward it off.

The Wight Knight bears a strong resemblance to the mummy character from The Nightmare Before Christmas. Its grayish-blue skinned, almost skeletal figure is wrapped in patches of white gauze bandages; the head is completely covered in them, save for a gap that reveals a bright yellow eye in a shadowed face, and the Knight's "plume", a simple angular-spiraled antenna. Wight Knights also have a "ribcage" of six sharp barbs that surround their chest and Heartless emblem, large hands, and long barbed fingers and toes.

In Kingdom Hearts Final Mix Wight Knights have simple, straightforward recolors; gold replaces the white of the bandages, black is the new skin color, and the hands, fingers, and toes are re-tinted a reddish-brown.

The word "wight" has several meanings; as a noun, it can mean a ghost or a supernatural entity, referencing the Heartless's undead appearance. As an adjective, it can mean brave, valorous or strong, referencing the Heartless's quick, powerful attacks. The term altogether is a play on "white knight", which is ironic considering its decrepit appearance.

Wight Knights are fast and fairly strong, making it difficult to hit. In Kingdom Hearts, a carefully timed Guard will block a Wight Knight's attack, leaving it stunned and open for attacks.

In Kingdom Hearts: Chain of Memories, keep your distance from it and break its attack when possible, then make quick work of it. In Kingdom Hearts II, Guard will work, but Reflect is recommended. 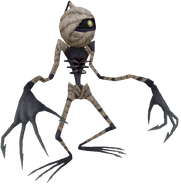 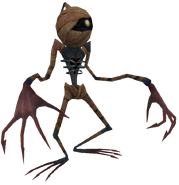 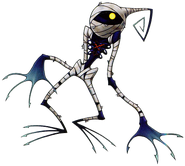