Template:Q A Wayfinder (つながりのお守り, Tsunagari no Omamori?, lit. "Connection Charm") is a star-shaped lucky charm that is used to provide luck to travelers. It is usually woven from Thalassa Shells, with some token at the middle, but there have been several imitations made from other materials throughout the series. It is designed after the paopu fruit, which is said to tie friends together. In Kingdom Hearts Birth by Sleep, the bond that the charms represent is manifested physically as the Dimension Link system. 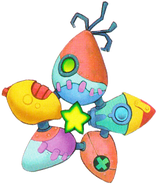 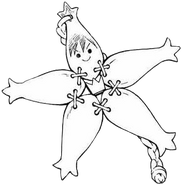 Artwork of Kairi's Wayfinder.
Add a photo to this gallery

Retrieved from "https://kingdomhearts.fandom.com/wiki/Wayfinder?oldid=742905"
Community content is available under CC-BY-SA unless otherwise noted.