Wasabi is a character in Kingdom Hearts III.

Wasabi is a large, burly man, creating a humorous juxtaposition with his ultimately soft nature. He is tall, very muscular, and well-kept, with his most notable feature being his smooth dreadlocks. He is also bearded, with brown eyes, and a dark complexion, and appears to be most fond of the colors green and yellow, when it comes to clothing attire. Wasabi can also be seen wearing all black, jikatabi shoes, which are often found in Japanese fashion.

When wearing his super suit, Wasabi dons mostly green, almost turquoise armor, accompanied by a flowing, shimmering cape (in promotional material), and what appears to be Japanese cropped pants, with particular patterns layered over it. Wasabi's jikatabi fashion also remains intact with his armor, though given red linings to accompany the black.

Wasabi appears in the third installment of the series. Taking place after the events of the film, the Heartless invade San Fransokyo, prompting Big Hero 6 to join forces with Sora, Donald, and Goofy. Despite the extra manpower, Wasabi is unabashedly afraid of the new threat and would rather fight someone their "own size".

After their first encounter with the Heartless on the San Fransokyo Bridge, Wasabi is agreeing with an online news article that questioned Big Hero 6 and their ability to protect the city after getting their butts handed to them by the Heartless. After Sora explains about the Heartless and their origins, Wasabi is quick to remind Fred that their situation is serious business since Big Hero 6 have no way to actually fight them. With Sora's help through a battle simulation developed by Hiro, Wasabi gives his blades the ability to be launched as projectiles. After being formally introduced to Sora, Donald, and Goofy, Wasabi and the rest of Big Hero 6 support them with fighting the Heartless, until discovering that they are being led by the Baymax that Hiro had to leave behind in the Silent Sparrow portal when they rescued Abigail Callaghan, now corrupted by the Heartless into a mindless killing machine with the remaining Microbots. With the help of Sora, Wasabi and the rest of Big Hero 6 are able to free the old Baymax from the influence of the Heartless and resume their duties with protecting San Fransokyo with the support of two Baymax by their side now.

Wasabi is a main character in the Disney film Big Hero 6. 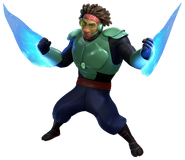