This χ-blade will open a door—one that leads to all worlds! Then, Keyblade-bearing warriors will flock here from each and every one of them, to battle for the light within Kingdom Hearts! And just like the legend says, the Keyblade War will begin!

Ventus-Vanitas is an antagonist in Kingdom Hearts Birth by Sleep. He serves as the final boss in Aqua's story. He is the result of a union between Ventus and Vanitas, yet retains Vanitas's goals and personality.

Ventus-Vanitas, as his name suggests, is the merged form of Ventus and Vanitas, and combines characteristics of both characters. He usually wears Vanitas's black and red bodysuit from the neck down, though he lacks the helmet and metal lining under the neck. Immediately after forming, he was still wearing Ventus's Keyblade Armor, but quickly donned the bodysuit. Physically, Ventus-Vanitas is nearly identical to Ventus, but he has Vanitas's golden eyes. His battle stance is identical to Vanitas's.

As Ventus battles Vanitas in their shared mind, Aqua and Mickey Mouse in the Keyblade Graveyard are attacked by a Vanitas-possessed Ventus. Ventus-Vanitas summons the completed χ-blade, and tries to attack Aqua, only for her to be saved by Mickey. He then goes on to explain that he plans to unlock Kingdom Hearts so the worlds can be connected and the legendary Keyblade War can begin again for Master Xehanort.

Aqua, tired of Vanitas's nonsense, confronts him in battle one last time. As Aqua defeats her possessed friend and destroys the χ-blade, Vanitas's metaphysical battle with Ventus comes to an end after he shatters the pillar on which they were fighting. Vanitas is completely destroyed, taking all Unversed in existence with him and relinquishing his control over Ventus. Unfortunately, it is a pyrrhic victory, as Ventus loses his heart and falls into a coma in the process.

Ventus-Vanitas wields the most powerful Keyblade of all, the χ-blade. This weapon multiplies his initial strength and attack range a great deal. He shows great skill in wielding it, able to perform strong combos and powerful desperation moves. 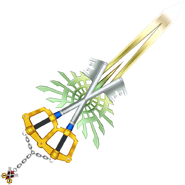 The complete χ-Blade.
Add a photo to this gallery

Ventus-Vanitas in the Keyblade Graveyard.
Add a photo to this gallery
Birth by Sleep
Retrieved from "https://kingdomhearts.fandom.com/wiki/Ventus-Vanitas?oldid=791390"
Community content is available under CC-BY-SA unless otherwise noted.