A being called the Vanitas Sentiment (ヴァニタスの思念, Vanitasu no Shinen?) appears as a secret boss in Last Episode's scenario, in the Keyblade Graveyard in Kingdom Hearts Birth by Sleep. Before attacking Aqua or Ventus, its battle must first be accessed by entering a dark portal with a picture of the charm found on the end of the keychain found on Vanitas' Keyblade, similar to when Sora encountered an Absent Silhouette in Kingdom Hearts II Final Mix. It drops a Hidden Gem (秘められし魔石, Himerareshi Maseki?) when defeated.

While the Vanitas Sentiment has significantly less HP (one bar) than some bosses previously fought, it is important not to underestimate it. The Vanitas Sentiment uses a skill-set similar to the true Vanitas, the attacks more powerful versions of themselves. Each of these tactics have the potential to instantly drop Aqua or Ventus's HP into the "Alarm Zone," thus the boss should be approached with caution.

Some differences in the Vanitas Sentiment's moveset include the fact that its standard behind-aerial attack can hit multiple times, time before the attack when the boss freezes in place significantly shorter. The fireballs it shoots fire at a much faster pace. The Vanitas Sentiment also has a fair share of new tactics in its arsenal, however, able to dash around in the shadows before several dark, crystalline and floating blades attack Aqua or Ventus from both sides. When the boss holds its blade above its head, the Keyblade it holds powers up, leading to several powerful slashes, the combo finishing with a long-range slash in the shape of an "X" that will home in on Aqua or Ventus unless it comes in contact with an obstacle beforehand. It may also surround itself in darkness, "shadow" versions of itself performing aerial combos. Not only this, but the Vanitas Sentiment will then proceed to power up, surging with energy, attacking its opponent from beneath. 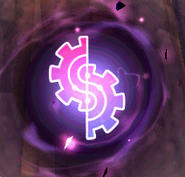 Retrieved from "https://kingdomhearts.fandom.com/wiki/Vanitas_Remnant?oldid=246718"
Community content is available under CC-BY-SA unless otherwise noted.