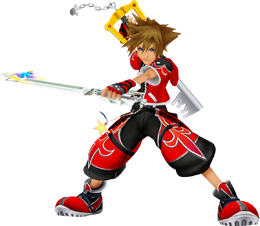 Valor Form (ブレイヴフォーム, Bureivu Fōmu?, "Brave Form" in the Japanese version) is the first Drive Form attained in Kingdom Hearts II. This form is obtained along with Sora's new clothes at Yen Sid's Tower. Sora merges with Goofy to transform. The form turns Sora's clothes into a red and black color scheme with a fleur-de-lis on each sleeve and pant leg. In this form, Sora wields two keyblades. This form focuses on attack, and is the most offensive of any form. Valor Form allows Sora to get in close and bash away to do heavy damage in a short amount of time, at the cost of losing the ability to cast magic.

While in this form, Sora can run faster than usual, making Valor the second fastest Drive Form, compared to Final's gliding ability.

This form also gives Sora access to the Star Seeker Keyblade until he obtains the Keyblades Hidden Dragon or Hero's Crest.

200px
The Valor Form is easy to level up compared to the other forms in the game. It levels up simply by landing successful hits on an enemy, and Valor Form is noted for very long combos.

It is possible to level up Valor Form to lv3 easily almost as soon as it has been obtained. After leaving Hollow Bastion, clear the route to Beast's Castle and, after seeing Beast take his rose from the parlor, head out into the main hallway. Drive into Valor Form, and defeat all the Hook Bats: three in the centre, four near the door to the courtyard, and three at the top of the stairs. Then quickly return to the parlor before the Drive Gauge runs out and exit to the World Map. Upon re-entering the world, the Drive Gauge will be re-filled to max. Simply repeat this as many times as desired, but note that you cannot level up the form higher than lv3 at this stage.

By leveling up the Valor Form, Sora will develop the ability High Jump, which allows him to jump at previously unreachable heights. Sora also gains Combo Up abilities by leveling up this form.

This form represents Sora's courage and strength. It also is also similar to Roxas's fighting style because it abandons defensive capabilities in favor of power and speed.

Retrieved from "https://kingdomhearts.fandom.com/wiki/Valor_Form?oldid=92946"
Community content is available under CC-BY-SA unless otherwise noted.