View source
watch 02:42
How to Level Up Valor Form in 'Kingdom Hearts ll'
Do you like this video?
Play Sound 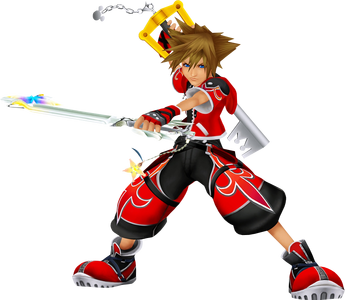 Valor Form is obtained along with Sora's new clothes at the mysterious tower, and is the first drive form obtained. Similar to Wisdom Form, it consumes three Drive Bars. The form drastically increases Sora's strength, as well as his running and jumping ability, while also increasing his ground combo attack by one. However, this is at the cost of being unable to Guard or cast magic of any kind, making Valor Form the most offense-oriented Drive Form. Sora is also capable of locking down enemies with his fast attacks, and parrying enemy attacks while slashing; but larger foes like Large Body Heartless or Berserker Nobodies can shrug off Sora's hits. One of Sora's abilities in Valor Form, Omega Finale, allows him to unleash finishing attacks at any time during a combo without needing to finish it. In Valor Form, Sora's attacks are executed with two Keyblades. When he receives this Form from Flora, Fauna, and Merryweather he also receives the Star Seeker Keychain as the default second Keyblade. Sora develops the Combo Plus and High Jump abilities by leveling up this form.

This form turns Sora's clothes into a red and black color scheme with a fleur-de-lis on each sleeve and pant leg. In this form, Sora wields two Keyblades, and is also very dexterous, sometimes even spinning the Keyblade on a single finger during a combo. No matter what world Sora is in, Sora's hands glow light red and flicker with red electricity. When Sora runs in Valor Form, flakes of red energy fly off of his hands in a streak.

Valor Form as an item.

While in combat, Valor Form is designed to deal rapid damage to enemies using quick bursts of physical attacks. To compensate for the lack of defensive options, the player should take advantage of Valor Form's increased movement speed and jump height to evade enemy attacks while quickly moving in and unleashing more high-damage combos. Valor Form earns one point per successful hit on an enemy. Both Sleeping Lion and Star Seeker are useful for leveling this form, as both possess Combo Plus abilities. Alternatively, if the player equips Sweet Memories, which has no strength boost, then hits will deal less damage and allow for more hits per enemy. Finally, the Oathkeeper is a great Keyblade to use, as it has the Form Boost ability, which makes the Drive Gauge last longer.

If possible, it is also a good idea for the player to equip any (Air) Combo Plus abilities and unequip (Air) Combo Boosts, or any other abilities that increase damage. Party members should be set to Party Attack, so they do not kill Sora's target too quickly, or Sora Attack so that they do not attack at all. As Valor removes Sora's ability to use magic, Donald (or whoever is currently set as the second team member) should be depended on for healing with Cure magic or items. Otherwise, Sora should be equipped with healing items such as Potions, Hi-Potions, Mega-Potions, or Elixirs.

Morning Stars and Crimson Jazzes are enemies which take a lot of damage, their attacks are easily disrupted by Valor Form's finishers, and drop a lot of Drive Orbs when defeated. These enemies appear together in both Hollow Bastion and Beast's Castle, making both of those worlds good places to level up Valor. The Entrance Hall in Beast's Castle also has the added benefit of closely grouped enemies and a Save Point right next to the battlefield.

Another option is The Land of Dragons, starting in the Throne Room. Traveling through to the Antechamber triggers three waves of Assault Riders, which take many hits to defeat. When the Drive Gauge is near empty, a Save Point can be found back in the Throne Room.

In Kingdom Hearts II Final Mix, an optimal place to level Valor form is The Cave of Wonders: Treasure Room in Agrabah. Land in the Chasm of Challenges and walk through the large door. Mushroom No. 5 of the Mushroom XIII appears here, and when the battle is initiated, the Mushroom starts to constantly regenerate health. At lower levels where Sora cannot out-damage the health regen (30 Strength or less), leveling Valor is as easy as constantly attacking, though after one minute and forty seconds, Mushroom No. 5 leaves. If however Sora is at a higher level such as 80+, then the player should continue to attack the Heartless until its HP is reduced to about one bar, and then let it regenerate for a few seconds so as to not defeat it. If the Mushroom is defeated, or if the Drive Gauge is running low, leave the Treasure Room and use the Save Point outside.