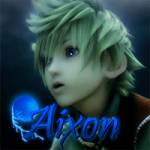 Since you're reading my userpage, I suppose that you're out on a quest to discover more about me. Well, it's only fitting that I talk a little bit about myself to sate that thirst for knowledge that you quite clearly displaying, seeing as you've read down this far... As the page states at the top, my username is Aixon, which just so happens to be a Nobody-esque alteration of my real name, which I shall leave you to guess...

I first became interested in Kingdom Hearts at the beginning of 2013, having heard little bits about the games before, but not having thought much of it. A friend of mine introduced me to a You Tube cutscene movie of the first game. At first, I was a little skeptical, but soon enough, I was hooked! From then on, I devoted much of my life to watching all of the games through, before eventually deciding to buy myself a 3DS and along with it, Kingdom Hearts 358/2 Days and Kingdom Hearts 3D: Dream Drop Distance. Both games I have played, and have loved every moment of... Well, except perhaps for my futile attempts to defeat Saïx in my first run through of 358/2 Days at level 11... (What was I thinking?) I don't own any Playstation game console myself, so I have had to content myself with watching the rest of the games that exist in the series... One day though, I will play the remainder of the games...

As for the Keyhole, I was introduced to this site by the same friend who first showed me the series itself. This became my primary source of information about the series, and I soon created a user account, and have been active here since, contributing where I feel the need to do so, and also undertaking challenges to increase my knowledge, and ability to edit. I have been guided and nurtured by the active members on the wiki, and can now happily feel that I am a part of the community. On the 17th of January, 2015, I became a moderator on The Keyhole. I have accepted this new responsibility with gratitude and continue to do my best to maintain the wiki at a high standard.

Among my seemingly random edits, I have undertaken two extensive Projects to improve the state of the world articles that pertain to Kingdom Hearts 3D: Dream Drop Distance and also to create a template for and add infoboxes to every mini-game page on this wiki. These have both now been completed, after many hours of hard toil.

2016 for me marked the start of a new and uncertain era on the wiki. With the departure of LA and the inactivity of many former users and staff members, things have changed just a little. However, I remain here to help make the Keyhole the best wiki it can be for Kingdom Hearts. On the 20th September, 2016, I was promoted to administrator status. I have been honoured to take on my new role, and will endeavour to do my best to uphold the standing of The Keyhole through my actions. I continue to take on new work to do on the wiki, and do my utmost to complete what I have started.

A Little Something About Me

I live in the United Kingdom and I am Welsh. My username is an anagram of my real name, which I will leave for you to guess...

I am a hard-working person, and will always endeavour to see a task through to the end, if it is within my ability to do so. Alongside this though, I also like to take my time over projects, as trying to rush me often doesn't bring out the best results. Whilst being a hard worker, I do try to find time to purse other things. Editing here on The Keyhole helps me to engage my brain in a nice task, and to relax my mind, which is often prone to be stressed. I am a good listener, and enjoy spending time with people I care about. Letting someone down is not something that I enjoy doing, so for my friends on here, you have the promise that if you ask something reasonable of me, I will try my best to do it, no matter the time restraints.

I'm fairly easygoing and calm the majority of the time however, and enjoy lighthearted discussions and conversations with people on a range of different topics. I don't, however...how shall we put it...'suffer fools gladly'. I don't respond well to people that go out of their way to make trouble for others, nor do I hold any respect for those that do little things in an attempt, whether intentional or not, to aggravate a user. Editing purely to increase your edit count will not place you very high up on my page of valuable editors either. At the front of my personal book of such editors are those who dedicate their time to things which require effort. These users do so without complaint or regard for their own sanity well-being. My tips: be enthusiastic, be respectful, use integrity, and lastly...give encouragement to other users when appropriate.

Regarding my interests, I have a number of hobbies! I swim four times a week usually, and also swim competitively for a club, often participating in galas and other competitions. In addition to the swimming, I run a lot. My preferred distances are anything 5k and upwards. 10ks and half marathons are my forte! I also enjoy writing. Though I have found myself a little disengaged from this particular pursuit recently, I still very much enjoy it. Writing articles is also my speciality here on this wiki. My last noteworthy interest is my love of all things Korean! I have been learning the language since December 2016 and am making significant progress towards my ultimate goal of fluency. I enjoy listening to Korean music (Kpop), and my favourite groups are EXO (엑소), Mamamoo (마마무), ASTRO (아스트로), AOA (에이오에이) and Highlight (하이리이트). I keep up with recent Kpop-related news, and love discussing it with others! I also enjoy watching Korean dramas, though I am saving much of my inevitable binge watching for a time when I can speak and understand the language better.

Within the Kingdom Hearts series, Roxas, or Roku, as I like to refer to him (Simply out of a like for him), is my favourite character.. It took me a while to decide who it was that I most liked, in which time I cycled through Zexion, Ventus, Aqua and even Larxene. I finally arrived at Roxas, after I realised that he was the only character that I really could empathise with throughout his troubles. I admire him for how he expresses his emotions, instead of hiding them in a shell, and also for his perseverance to overcome the problems that he faces in his life. My favourite scene in the series also involves Roxas, alongside Xion, and holds the record for being the only scene to reduce me to tears. RokuShi is my favourite OTP!

If you want to get to know me better, there's my talk page, and I am also a somewhat regular visitor to the IRC channel too, so look for me there.

Around the wiki, my main contributions come as a mainspace editor. Although, many of my edits may be in my userspace, plenty of them involve preparation of tables, infoboxes, etc... for the mainspace. Writing is my strongpoint, but I'm also relatively proficient at coding. However, by no means am I an expert. There are other users on this site that are better at that than I.

These people have been there for me since the start. They've helped me learn, sent me encouraging messages via my talk page, and taught me much about the wiki. I'm truly grateful to every single one of them. Each of them has contributed in their own special way to my life. If not for them, understanding the workings of the wiki, and making the transition to the editor that I am today would not have been possible.

Memories of the Past

Retrieved from "https://kingdomhearts.fandom.com/wiki/User:Aixon?oldid=752505"
Community content is available under CC-BY-SA unless otherwise noted.