A giant Nobody who Roxas fought at the Station of Awakening.

Although it tried to capture Roxas with its thorns, it was overpowered and defeated by the strength of the Keyblade master.

Only one Twilight Thorn appears, when Roxas goes to the Station of Awakening. When Roxas senses a presence and turns around to see who it is, he briefly sees a figure wearing a black coat before it transforms into the Twilight Thorn, just as Sora, in his own Dive to the Heart, turned to see a Shadow Sora which became a Darkside.

Since the player battles the Twilight Thorn as Roxas, they will not receive its journal entry until they return to Simulated Twilight Town as Sora.

The Twilight Thorn is a gargantuan Nobody that seems to be clad in a white bodysuit, as evidenced by the large, silver zipper lining its front. Its simple, round head's only feature is a white Nobody logo on its front where the creature's face would be. It has rather thick, short legs with spikes on its hips and long, pointed feet. Its waist is quite thin and has dark grey sides. Its shoulders each sport a gigantic, diamond-shaped spike and its arms are very long, and reach the floor when fully extended down.

The Nobody only seems to have one distinct digit on each of its hands, the thumb. It also seems to have high-heels on their ankles. It also has four long, blue tentacles with tips resembling the spikes on the Nobody sigil that wrap around its neck. Its overall body shape seems to be meant to resemble the Nobody symbol. Despite its size, the Twilight Thorn has the same astounding level of flexibility as all other lesser Nobodies. It also bears a strange resemblence to Marluxia's second form in Kingdom Hearts: Chain of Memories.

The Twilight Thorn's name refers to the time of day between sunrise and sunset, which, in turn, references the fact that Nobodies are not truly aligned with the Light or the Darkness. "Thorn" refers to the thorns it can generate as weapons. Its Japanese name, Twilight Zone, highlights its numerous similarities to the Darkside Heartless. Both Twilight Zone and Tales from the Darkside are science-fiction horror serials. 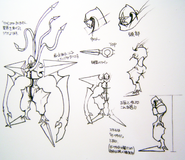