Heartless that Sora and company encounter while they searched for Alice. Its herky-jerky attacks and juggling act flustered Sora and the others.

The Heartless in Wonderland that stole the Queen of Hearts's memory.
Victims of memory theft don't even remember what it is they forgot.

The Heartless that threw Wonderland into chaos. It appeared to Riku as a token of the indelible Darkness in his Heart.

The Heartless responsible for the memory mix-up in Wonderland. Its fiery juggling and uncanny ability to turn space topsy-turvy gave Sora a run for his money. Wait for an opening, then use projectiles to put a frown on this clown.
Crimson Prankster
Trickmaster Ω
Jack in the Box
Egg Master

The Trickmaster is a Heartless who can be found exclusively as a boss throughout the Kingdom Hearts series.

A Trickmaster is a bizarre Heartless with spindly legs resembling scissor jacks, arms that appear and sound like they're made of paper, and a head that is made of several segments balanced of top of each other. Each of these segments sports its own face—though all of the faces have the same glowing yellow eyes and jagged mouths—and they alternate in color from red to black.

Its arms are black and it often juggles clubs with zig-zagging, purple and lavender stripes on them. It wears black armor with large, red shoulder pads, a black codpiece, and has a very thin and small red body. The upper halves of its legs are red, while their lower halves are black. Its feet are black, flat, and curl at the tips. Much of its upper body and head sport gold highlights.

In Kingdom Hearts Final Mix, the red sections of the Trickmaster's body become lavender, the black sections become red-violet, save for its arms, which become a dark shade of steel blue. Its clubs become striped with black and white, and its feet and the gold tinges on its body and head both become yellow with a slight green tint.

It looks similar to the Crimson Prankster. 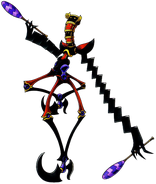