It has two faces, both of which need to be fought differently.

When in the air, move in close to seal its long-range attacks. When on the ground, move far away to avoid its short-range attacks.
Magic Phantom

Trick Ghosts are almost like two enemies in one. A Trick Ghost attacks from a distance in the air by firing dark fireballs from the candle it holds. It may also attack by similarly releasing a slow, zig-zagging dark wisp.

Alternatively, the Trick Ghost may drop to the ground and flip onto its head. On the ground, it will use a close-range strategy (similar to the Powerwild) and attack with its arms. Though its attacks are considerably hard to avoid at close range, they are not all so devastating. They are also one of the few species of Heartless which use a darkness attack.

A Trick Ghost can be viewed right side-up or upside-down. Regardless of which half of the Heartless is on top, it has long, white arms with three short, purple fingers on each one. Its body is predominantly white, and it has four yellow eyes—two for each face. Its mouth is jagged and purple on the inside, and has what seem to be stitches on its corners. When right side-up, the Trick Ghost's mouth seems to be frowning, and its head is tipped with a long, curled antenna. This antenna is decorated by horizontal stripes of purple, tan, and lilac. Its Heartless emblem is on the lower half of its body, between the eyes of the second face. When upside-down, the Trick Ghost seems to be smiling, its head sports several short spikes, and the antenna on the normal face is now a tail of sorts.

In Kingdom Hearts II Final Mix, the Trick Ghost's white body is now light green, and the stripes on its antenna are yellow, blue, and sky blue in color.

The Trick Ghost's name refers to the fact that it resembles a stereotypical ghost. "Trick" may refer to the Heartless's ability to surprise its opponents by changing its battle style by flipping over, which could also be considered a type of "trick".

The Trick Ghost is not a difficult enemy though it can be annoying. It switches occasionally between its ground form and aerial form. They tend to float up high, which makes it hard to get a hit in. Just use physical attacks to beat it and magic if it flies too high for you to hit. 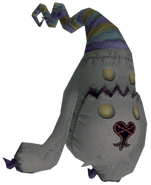 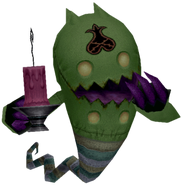