A Heartless that flies about using its arms like propeller blades.

Whether moving or attacking, it's always spin, spin, spinning — but never seems to get dizzy.

It attacks as it moves, so once it starts spinning, stop its movements with reaction commands.

It is one of only three Heartless that debut in Kingdom Hearts: Chain of Memories, along with the Creeper Plant and Crescendo.

The Tornado Step has a very small, navy-blue body, emblazoned with the Heartless emblem. Two short legs can be seen at the bottom of the body, and a short, thin neck extends from the top to its round head, harboring two glowing, yellow eyes and a jagged maw.

The Heartless wears a tall, conical, blue hat, with a bent tip and two yellow, spiral-like designs on the front. It has long arms extending from where its ears would be, clothed in light-aqua colored sleeves connected to the Heartless's hat. Large hands and yellow cloth cuffs can be seen at the end of the arms.

In Kingdom Hearts II Final Mix, the Tornado step experiences a very dramatic color change; its body and head now have a reddish tint, its hat is a light-orange, the spiral-like designs are now dark-orange, its sleeves are a light-yellow color, and the sleeves' cuffs are green.

Tornado Steps are not difficult enemies to defeat, though their spin attacks can get irritating. Physical attacks are all that is needed to beat them.

The Tornado Step can also heal when its HP is low. 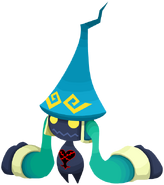