Timon and Pumbaa are a meerkat and warthog respectively living in the Pride Lands who appear in Kingdom Hearts II. They live in the Oasis with Simba, and together lived a carefree life until Nala found Simba and tried to convince him to go back to the Pride Lands with her. With the help of Sora, Donald and Goofy, Timon and Pumbaa pulled their courage together to help fight Scar's hyena army.

Timon and Pumbaa often say their motto Hakuna Matata, which means no worries in Swahili.

He usually has very little courage and is not much of a fighter, but whenever his friends need help, he will be there to protect them and make sure they are safe. However, in the film (and towards the end of the first visit), he shows a different, strong, brave side of him whilst fighting the hyenas, in which he brutally pummels them in a fit of rage, when they threaten his friends and call him a "pig".

Timon is a small meerkat with light tan fur over most of his body, save for the front, which has white fur. The tips of his toes, his fingers, half of his tail, and his large nose are all brown. The ridges of his ears and his "eyebrows" are dark red and his eyes are brown. He also has light brown rings around his eyes. Timon's ears point downward and he has an unexplained, short, spiky head of orange "hair" on the top of his head. His back sports several horizontal, grey stripes. Timon's forearms are unnaturally thin, particularly when compared to the size of his hands. The fur on his chest and elbows is ruffled.

Pumbaa is a warthog with light tan fur and dark red cloven hooves. His belly is grey and his eyes are brown. True to his species, Pumbaa sports two large, ivory tusks jutting out of either side of his mouth. The tips of these tusks curve upwards sharply. Pumbaa has a large, flat snout which is pink at the front; under it is a big mouth with a rather huge pink tongue. His ears are set just behind each of his eyes. He has a very large mouth and a pink tongue. Finally, Pumbaa sports a tuft of shaggy brown hair on the tip of his tail and on the top of his head, the latter creating a mohawk-like mane.

On the first visit to the Pride Lands, Timon is not seen until Simba is seen in the Oasis. At this point, Timon looks a little emotional to a degree, noting to Pumbaa: "Look at 'him Pumbaa, look at how he's grown. Why, when I rescued the little guy, he was only this big" and then lowers his hand to level with his knee.

He is eventually met by Sora and the gang and teach them about Hakuna Matata, which means no worries. As he leads a conga line of sorts with him at the lead and Sora, Donald, Goofy, and Pumbaa in the back, he chants "Hakuna", while the others respond "Matata". However, this carefree antic is put to a stop by Simba's fight with Nala about going back to the Pride Lands.

Later, Timon helps the entire group to try and take down Scar, alongside Pumbaa. However, their attempts ultimately fail and they are cornered by Shenzi, Banzai, and Ed in a cave, becoming Sora's responsibility to rescue them.

At the end of the First Visit, Timon is present and even delivers the line, after the gateway to the next world has been opened, "Hey! What's with the light show?", which shows other people can see the glow that is seen whenever Sora unlocks another gateway.

Pumbaa is not seen until much later in the first visit, and has very few lines throughout. Some notable scenes are when Pumbaa is almost eaten by Nala, and his capture by the hyenas Shenzi, Banzai, and Ed which leads to a boss fight against the three hyenas. In this battle, Sora has to protect Timon and Pumbaa.

While Sora and his friends were at the Oasis, he and Timon told them about "Hakuna Matata". After Simba and Nala have an argument about going back to Pride Rock to take down Scar, the five of them enter the area chanting "Hakuna Matata".

At the end of the final cutscene, he is shown to be quite nervous due to Timon's comment: "What if he [Simba] forgets to tell the predators who we are?" with Pumbaa shortly responding apprehensively, "Yeah, and I'M NOT GOING TO BE SOMEONE'S PORK DIIIIINNNNEEERR!" finishing in a panic and running off in a dash.

Timon and Pumbaa are scarcely seen in the second visit, and mostly only play a role of hinting where you should go next. However, in the end, Pumbaa adds onto Timon's "Live for today" words by saying: "And put your past behind you!", moving in a carefree, joyous trot. Pumbaa also shows courage by protecting the pregnant Nala from Scar's Ghost up on Pride Rock, despite being frightened by the apparition.

Timon an dPumbaa originally appeared in the 1994 film The Lion King. 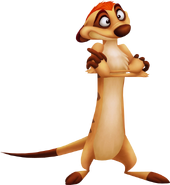 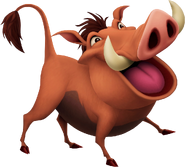