View source
watch 02:56
Raise a Floppa - The Loop
Do you like this video?
Play Sound
Article incomplete
This article is incomplete. You can help the Kingdom Hearts Wiki by adding Statistics..

Make no mistake, a Thornbite by any other name would still smack you around. Those vines lash out further than you might think, sending you flying if you don't watch it. Direct attacks cause these plant pests to start glowing and gain a dangerous burst of speed. Use magic commands to spare yourself the prickly predicament.
The Thornbite is an Unversed that is found in Kingdom Hearts Birth by Sleep and Kingdom Hearts Birth by Sleep Final Mix. It normally appears with other Unversed, and can even be summoned by the Cursed Coach.

A Thornbite's lower body resembles an orange flower pot or spinning top. Its head is spherical and black and sports a pink flower blooming on its top. Its arms, which sprout from either side of its body, are long, green, thorny vines that end in dark green leaves. Its red eyes are set in a sorrowful expression. The Unversed symbol is on the back of its head.

In Kingdom Hearts Birth by Sleep Final Mix, the Thornbite receives a new coloration. Its vine is now green, its face black, its "spinning top" body is now white, and its flower top is gold.

A Thornbite, while weak, can be quite a menace in a group, especially when paired with the Cursed Coach. It attacks players with its vines by spinning. A few hits will kill it quickly. Magic is also effective against this enemy. 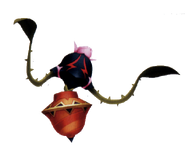