Spirit of the Mirror, come from the farthest space. Through wind and darkness I summon thee... Speak! Let me see thy face!

The Queen, personality-wise, shares many traits with Maleficent. Like Maleficent, she is depicted as a vain and jealous individual. She is quite cruel, willing to kill Snow White out of her own jealousy, and shows no kindness to anyone, including her own servants. She also has zero tolerance to failure, punishing anyone who defies or fails her, an example of this is when she turns the Magic Mirror into an Unversed when he refused to attack Terra.

You claim to be radiant, but all I see are shadows of jealousy, hanging thick on your heart.

Terra to the Queen.

The Queen is a pale-skinned woman with blue eyes, red lipstick, and seemingly penciled-on eyebrows. She wears a gold crown with five spikes on the front and a jewel on the tip of the middle and tallest spike. She also wears what seems to be a black balaclava that covers her ears, neck, and hair and only leaves her face exposed. She wears a close-fitting, han blue dress with enormous hanging sleeves with white cuffs. The Queen's dress has a high collar that is white on the inside and she wears a red cape, much like Snow White and The Prince. She also wears a gold pendant around her neck with a ruby set in it, as well as a long, rope belt tied around her waist.

In her hag form, the Queen dons a black, hooded robe that retains the hanging sleeves of her dress. Her physical appearance changes from that of a youthful queen to that of an ugly, old witch with long, tangled white hair. She has thick, black eyebrows, green eyes, and dark rings around her eyes. Her nose becomes long and crooked and gains a large wart and she only has one visible tooth on her bottom jaw. Her hands are gnarled and have pointed, dirty fingernails. In this form, the Queen is also often seen with a basket filled with poison apples. She also seems to wear grey slippers.

In Terra's scenario, the Queen asks him to bring her Snow White's heart, and would allow Terra to ask her Magic Mirror about Master Xehanort's whereabouts in return. Terra fails in this endeavor, causing her darkness to grow in her anger. She commands the mirror to attack Terra, and when it refuses she smashes a potion into it. This transforms it into an Unversed that attacks Terra, but he wins the battle. The Queen reluctantly allows Terra to use her mirror and begins plotting how to kill Snow White once Terra leaves.

In the Japanese version of Kingdom Hearts Birth by Sleep, the Queen's darkness instead transforms the Magic Mirror into an Unversed.

In Ventus's scenario, she appears under the disguise of an old hag and prepares to carry the poisoned apple to Snow White, but drops it on her way. Ventus, unaware of her motives, politely gives the apple back. She also tells Ventus how deep Terra is dabbling into darkness.

Some time between Ventus and Aqua's scenarios, the Queen succeeds in having Snow White eat the poisoned apple. She is then only briefly mentioned in Aqua's storyline by the Seven Dwarfs, who tell Aqua they chased away the Queen following her foul deeds. The Magic Mirror later tells Aqua that the Queen is dead and he is no longer under her control.

The Queen is known to be an evil witch, which makes her magical in the dark arts. She has control over the Magic Mirror and can make it act according to her bidding.

In the Disney film, she is shown to be able brew potions and casts a spell to activate the potion that would turn her into an old hag.

The Queen made her debut in Disney's first-ever animated film; Snow White and the Seven Dwarfs. Stepmother of Snow White, she longed to kill the girl out of jealousy of her beauty. Consulting her Magic Mirror, she hired a huntsman to do the job. The man let Snow White escape, however, much to the Queen's displeasure.

She eventually found the girl in a cottage owned by the Seven Dwarfs, and transformed herself into an old hag; her intention was to look like a kindly grandmother, yet this was not the case. She convinced Snow White to bite from a poisoned apple that would kill her unless she received Love's First Kiss. The Dwarfs went after the Queen, however, and sent the villain toppling off a cliff when one of her own schemes backfired. 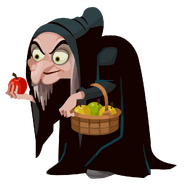