Kingdom Hearts Wiki
Register
Don't have an account?
Sign In
Advertisement
in: Worlds in Dream Drop Distance, Worlds in Melody of Memory
English

The Grid is a world in Kingdom Hearts 3D: Dream Drop Distance. It is based on the 2010 Disney film Tron: Legacy.

Sora arrives in the world and notices his change of appearance, before realizing that the world is, in fact, The Grid; this excited Sora, who was hopeful that he would get to see Tron again. Shortly after, a Recognizer flies by, and Sora follows it, trying to get a good look at it. Unfortunately, he is stopped by two Black Guards, capturing him for being a "stray program". However, Sora is able to break the grip of the guards and run, who then begin to pursue him, until Sora runs into Rinzler, who seems to find Sora familiar, before he and the guards run off. Sam, Quorra, and Kevin see this from a distance and are immediately interested in Sora's weapon, and approach him. They introduce themselves and explain the world, as well as the fact that Rinzler is, indeed, Tron. In order to bring him back to his old self, it is revealed that his memories must be restored from the Rectifier.

Sora and Quorra depart and head for the Rectifier, where CLU, the autocrat of The Grid, has kept Tron's memories. As they arrive, they are attacked by Rinzler, who Sora attempts to convince of his old self. Unsuccessful, Rinzler attacks the two. Quorra attempts to fight him off, but loses, only to have Sora try to save her before being separated from the fight.

Young Xehanort and Xemnas reveal themselves, telling Sora that when memories accumulate, they bloom into emotions. But in the digital world of The Grid, no matter how much you accumulate memories, emotions don't sprout at all. They also tell him that no matter how much memories are inside someone, they don't have a heart to express emotion. After explaining the details of The Grid's origin to Sora, Xemnas leaves Sora to Young Xehanort after calling him "The Chosen One". CLU then arrives, and takes Sora prisoner.

CLU tries to make a deal with Sora, exchanging the Keyblade for Tron's memories. Unable to make the trade, CLU forces Sora and Rinzler to fight, after which Sora manages to restore Tron's memories. CLU, enrages, attempts to hit Sora with his disc, but is deflected by Rinzler, who falls through a hole in the floor, unsuccessfully attempting to reach Sora's hand. Quorra returns, and talks to Sora, before he locks the Keyhole and frees the world of its slumber.

Riku arrives to see the Recognizer land in front of him, with guards approaching him, calling him "another stray". Instead of putting up a fight, he decides to accepts his imprisonment and boards the ship. In it he meets Sam, who tells him they are in the Grid.

Soon after, Riku is summoned to a Light Cycle Course, where CLU informs him he has the privileges to be a part of this entertainment. After a few rounds, fighting off other racers, guards and a giant Dream Eater, Riku escapes.

At the edge of the City, he meets up once again with Sam and decides to join him in search for a Portal to get him and his dad, who has been hiding within the grid, out into the real world.

After reaching the City Square, Sam excuses him for a while to meet his contact. Soon after, while Riku is becoming bored, Dream Eaters attack. After disposing of them, Sam returns with a wounded Quorra and his Father Kevin Flynn.

They decide that they have to retrieve Kevin's disc from CLU, and should find a Solar Glider from the docks to reach CLU's Throneship.

Arriving at the Throneship, Quorra gives her presence away, in order for the others to be able to infiltrate the ship unnoticed. While Kevin goes to prepare the three a ship to escape with, Sam and Riku run off to find the Kevin's Disc and save Quorra.

At the top of the Throneship, Rinzler attacks again, but Riku is able to take him out and knock him off the ship, making it his last appearance in Rikus side. After retrieving the disc and saving Quorra they return to the dock, where Kevin already has a ship ready, which helps them escape.

As they finally reach the Portal Sam was looking for, CLU appears, enraged that Kevin had broken his promise about creating a new, perfect world together. He then sends a giant Dream Eater to attack them, and Riku takes care of it.

Unable to see that Perfection is uncreatable, CLU attacks Kevin and then takes out Sam. Before another fight can break out, Kevin gets CLU's attention, and as soon as he sees the chance, destroys the bridge between him, Riku, Sam and Quorra, to keep them separated from CLU.

After this one finds out that Sam is Kevin's son, he tries to jump over the gap, but fails and has to pull himself up.

Meanwhile, Kevin tells his Son to leave him behind and go back to the real world with Quorra. At first Sam refuses to leave his father behind, but he understands that this is what his father wants and gives in.

Riku then stops CLU from attacking Sam and Quorra, and Kevin uses a vacuum to suck CLU into himself, and Sam and Quorra teleport out of The Grid.

Riku, now completely alone, looks up into the sky, wondering if he gets changed every time he travels to a different world, and how he is certain, there will be more trials to come.

In The Grid, Sora and Riku are converted into data and change forms accordingly. The design is similar as in Space Paranoids, only it has been given a sleeker shape with the lights on the suits being white, rather than blue, and the suit is more black than gray. Sora's skin and hair are as normal, unlike in Space Paranoids, when that also turned blue. Their weapons also change colour, appearing to be black with white outlines. 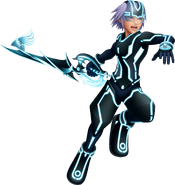