The Gazing Eye: a Keyblade forged from the eye of the Master of Masters. He passed it to me, as I have to others, and through it he can see the future - all that will ever come to pass.

The Gazing Eye[1], also known as No Name, is a Keyblade created by the Master of Masters, forged with one of his eyes. Eventually, the Keyblade would be passed down to Master Xehanort. In Kingdom Hearts Birth by Sleep, although he doesn't often draw the Keyblade, Master Xehanort wields his weapon whenever he fights, to channel his own dark magic and to use the ability to lock and unlock hearts.

In order to write the Book of Prophecies, the Master of Masters extracted one of his eyes and put it into a Keyblade he seemingly crafted by hand. He gave it to one of his apprentices, Luxu and told him to observe all that would happen so he could ensure he was able to foresee the future and write all he saw in the Book of Prophecies. He also told him to train an apprentice of his own to who he would then pass the Keyblade on to, and so forth.

The Keyblade eventually found its way to Scala ad Caelum, where it hung above a mantelpiece. The Keyblade was later passed on to Master Xehanort.

Master Xehanort used his personal, unique Keyblade to extract his apprentice Ventus's dark half from his heart from his body to create his second apprentice Vanitas, to fire bullets of darkness that scarred his former friend Master Eraqus, to fight with Vanitas against Terra, Ventus and Aqua and to exclusively fight against Terra.

According to several flashbacks, Xehanort is shown summoning Master Xehanort's Keyblade to release the hearts of Even, Ienzo, Aeleus, Dilan and Braig.

After his revival, Master Xehanort summons his personal Keyblade in an attempt to infuse his own essence into Sora but Lea saves the boy from Xehanort's attack.

As the confrontation between the Seven Guardians of Light and the Thirteen Seekers of Darkness begins, Master Xehanort uses his Keyblade to create the Skein of Severance, a labyrinthine structure which rises from the Keyblade Graveyard's barren ground.

After the battle against Master Xehanort, the Keyblade is reclaimed by Xigbar, who is revealed to be the current incarnation of Luxu.

The Gazing Eye has a spiky, black guard resembling demonic wings, a horned, demonic head just above the handle, two barbed shafts, and teeth resembling a battle axe split into three almost claw-like protrusions. It resembles the Oblivion Keyblade to a degree, but with two shafts and a different head. Its shaft and head are adorned with several twisting, silver patterns. It also contains two demonic, blue eyes (similar to the one on Riku's Soul Eater and Way to the Dawn, Terra's Chaos Ripper, Vanitas's Void Gear and Young Xehanort's Keyblade) with one on the Keychain and the other one on the head.

Master Xehanort is capable of converting his Keyblade into an orb of dark energy, which is shot into the sky to summon Kingdom Hearts. His Keyblade possesses a Keychain, which has a black charm with another demonic blue eye upon it.

In Kingdom Hearts Birth by Sleep Final Mix, No Heart has displayed the ability to transform The Gazing Eye into various forms including a shield-like form which creates a barrier of dark energy, a greave which he uses for kicking attacks, an arm bracer with the blade protruding past his hand for offensive capabilities, and wings for flying attacks. 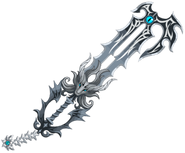 Retrieved from "https://kingdomhearts.fandom.com/wiki/The_Gazing_Eye?oldid=785428"
Community content is available under CC-BY-SA unless otherwise noted.