Pirates of the Caribbean

The Caribbean is a world in the game, Kingdom Hearts III. It is based on Disney's film franchise Pirates of the Caribbean, originally published in 2003.

Sora, Donald and Goofy appear again in the pirate world, but some events have been missed; Jack's debt to Davy Jones, Lord Beckett hunting pirates and controlling the seas, the convening of the Pirate Brotherhood Assembly against Lord Beckett and Davy Jones, and the search for Davy Jones's chest (which contains his heart). In addition to the interference of Organization XIII, Sora will learn to navigate the seven seas and save his comrades from them.

The three friends appear in the middle of the ocean in a rusty raft and are dragged to the End of the World, entering the Realm of Davy Jones. Wandering aimlessly through the desert, they spot the Black Pearl and with it, the witty Captain Jack Sparrow. After obtaining the Black Pearl stolen by the Heartless, they take it back to the sea, where they meet other familiar faces: Will, Elizabeth, Barbossa. They catch up on what was happening in the pirate world and must face a ruthless pirate named Davy Jones.

Tia Dalma, a "friend" of Sparrow, tells Sora of Jack's debt to Davy Jones, about how he wishes to get rid of the creature that hunts him; the Kraken. The only way to pay off his debt without dying is to find the chest that holds Davy Jones's heart. Unfortunately, this reaches the ears of the Organization and Luxord is in charge of obtaining that chest, as he knows this world well.

The Black Pearl manages to leave the Realm of Davy Jones and return to the waters of the Caribbean, but are ambushed by the Heartless. Sora fights them, but in battle, he gets separated from his pirate friends and is stranded with Donald and Goofy on a remote island, with a strange Jack Sparrow. Meanwhile, Jack is captured by Lord Beckett and talking of a deal.

Meanwhile, Jack, Sora, Donald, and Goofy explore the islands and find a cavern with a large ship, ready to set sail. Jack teaches Sora how to sail the Caribbean with his new ship and they meet Luxord, who through Parliament challenges them to a boat race to Port Royal and whoever I won, they will get what they want. Still mistrusting the Organization's plots, they accept the challenge. Sora wins the race, but Luxord manages to find the whereabouts of Jones's chest and cannonballs the ship to later escape. They must go to Port Royal in search of white crabs to repair the ship, a somewhat confusing order from Jack.

After repairing the damage to the ship, Jack makes a confession to them; He is the creation of the goddess Calypso to help them survive at sea and tells them that the real Jack Sparrow is with the other pirates in Shipwreck Cove, about to face Davy Jones and the Kraken. He gives Sora the option to retreat and be free as the wind, but Sora doesn't hesitate to help his friends and face sea lions. The three arrive to battle and update them on what happened; Jack was replaced by Will and ends up in the clutches of Davy Jones, but Barbossa ripped off his real eight, one of the objects that would help him free the goddess Calypso, who was Tia Dalma, to tip the scales to the pirates, but Calypso, furious at being trapped in a human body, denies her help and turns into crabs. The pirates were desperate, but Sora cheers them up, remembering how Calypso helped him and his friends as they all prepare to fight.

The Black Pearl and the Flying Dutchman battle inside a whirlpool, with the Kraken inside. Jack gets the chest but Luxord gets in his way trying to parley, but Jack throws him overboard. He comes face to face with Davy Jones and with the help of Sora, Donald, and Goofy, they confront the Captain and the Kraken. In the heat of combat, the chest is opened and Davy Jones's heart pierced, but Will is badly injured. They abandon the Flying Dutchman to the bottom of the sea, unable to help Will. The Pearl prepares for the next ship and then a new Flying Dutchman emerges from the depths, with Will Turner as captain. Both ships destroy Lord Beckett's ship and defeat him.

Everyone celebrates their victory and their freedom, but Sora is sorry for Will and Elizabeth, as they've married and now must live in separate worlds; one day on land, 10 years at sea. Jack teaches Sora that one day may be long enough when you are surrounded by friends and their hearts are connected.

Unlike the last time they visited, Sora, Donald, and Goofy alter their appearance to fit better with the aesthetics of this world, looking more realistic and detailed than usual. They also trade in their usual gear for pirate clothes, with Sora being the captain. 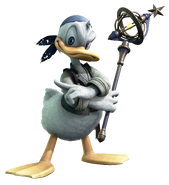 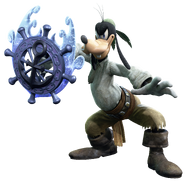 Sora, disappointed that he doesn't have a real ship

Will and Barbossa watch the Pearl reach the shore

Captains Sora and Jack Sparrow debate over parlaying with Luxord

Jack Sparrow aboard the "Black Pearl"

Gibbs, Elizabeth, Barbossa and Will see the Pearl come over the sand dune.

Locations in Kingdom Hearts III and Re Mind
Português
Community content is available under CC-BY-SA unless otherwise noted.
Advertisement