The Irritable Tank is a bomb-like Unversed that appears in Kingdom Hearts Birth by Sleep.

An Irritable Tank is a large, nearly spherical, bomb-like Unversed. Its upper body is pitch-black and its lower body is navy blue with red stripes. The two sections are divided by a red stripe around its waist. Its head is spherical with a tall antenna resembling a wick on the top of its head. Its head and the area around it is navy blue, and the area around its head has a red outline shaped like an eight-pointed star. Its arms are very short, nearly spherical, and seemingly useless. Their tips are silver and sport a short, silver rod. There is a gold wheel on its upper back. The Irritable Tank's red eyes are set in an angry expression and a large Unversed emblem adorns its chest. It has been shown to inflate and deflate at will.

Irritable Tanks are sturdy enemies, and can be a bit of a challenge to defeat if one does not use the proper strategy in order to do so. If these Unversed are hit from the front, they will glow red, swell, and finally become immune to damage for a period of time before exploding. In order to prevent this from happening, it is highly recommended that the player strike these Unversed from behind. Irritable Tanks can also attack players by bouncing on them, or shooting gusts of air from their arms. 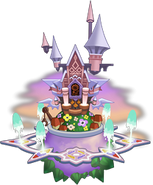 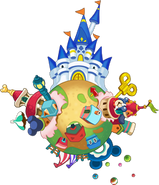 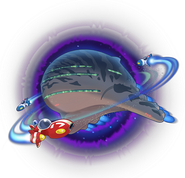 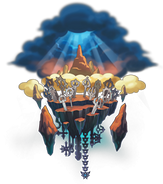 Retrieved from "https://kingdomhearts.fandom.com/wiki/Tank_Toppler?oldid=381907"
Community content is available under CC-BY-SA unless otherwise noted.