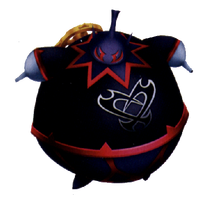 It is a large Unversed with a spherical body shape with a gold valve wheel on its back. It has a small head with prongs on it resting on top of a jagged collar. Its small arms resemble tops. There is a large red stripe separating the black top half and its blue and red striped bottom half.

Retrieved from "https://kingdomhearts.fandom.com/wiki/Tank_Toppler?oldid=329154"
Community content is available under CC-BY-SA unless otherwise noted.