Symphony of Sorcery (シンフォニー・オブ・ソーサリー, Shinfonī Obu Sōsarī?) is a world from Kingdom Hearts 3D: Dream Drop Distance, the second to be based on Disney's 1940 feature film, Fantasia.

Several images show that is based on the events of the original short.

In one scene, Riku is in front of a book that goes a symphony. In another scene, Mickey sees Sora outfit apprentice in directing the Brooms. Also, in a different scene, Riku is seen facing Chernabog on Bald Mountain. 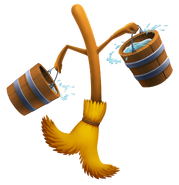