A Spiked Roller is a type of Nobody Ship that appears in various Gummi Missions in Kingdom Hearts II and Kingdom Hearts II Final Mix. They float about the screen, firing lasers from their spikes at regular intervals. There are also glowing Red and Gold versions of this enemy that drop treasures when defeated.

The Spiked Roller is a mechanical Nobody with a head that is spherical with a rounded protrusion on its underside and an arrowhead-shaped spike on its top. Its face sports a white cross that resembles the Nobody insignia. Two "arms" are attached to either of its sides, both of which end in cross-shaped guns.

The Spiked Roller's head and arms are an indigo color, the spike on its head is yellow, and the guns are shades of pink and purple with tan tips. During the battle with the World of Nothingness, a version of the Spiked Roller appears that is colored in metallic shades of steel blue and sky blue. The cross on its face is black in this version.

The Spiked Roller's name references the shape of the ships arms, and how it rolls the spiked wheel-like arms in order to move. Its Japanese name, "Missiler", may be a reference to the real-world Missileer fighter plane. 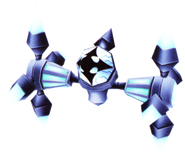 Add a photo to this gallery
Retrieved from "https://kingdomhearts.fandom.com/wiki/Spiked_Roller?oldid=790463"
Community content is available under CC-BY-SA unless otherwise noted.