It can be considered is a relative of the Knight Head. It speeds by faster than most Enemy Ships, and only takes a few shots when passing. There are also Red and Gold versions of this ship, which drop treasures when defeated.

A basic Speeder is a seemingly mechanical Nobody that resembles a small space shuttle. Its head, adorned with a white Nobody logo, is teardrop-shaped and has an antenna on its top. A conical gun is mounted in front of the Nobody's body, attached to a ring that is, in turn, connected to the main body.

During the battle with Xemnas's draconian form, a version of this Nobody appears with a black emblem and a body colored in shades of silver, white, and light blue.

The Speeder's name is a clear reference to the ships's speed and tendency to race past without firing many shots at the Gummi ship. 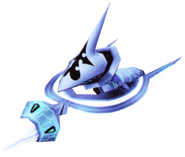 The Speeder as it appears during the boss battle with Xemnas
Add a photo to this gallery
Retrieved from "https://kingdomhearts.fandom.com/wiki/Speeder?oldid=790456"
Community content is available under CC-BY-SA unless otherwise noted.