Space Paranoids is a world within Hollow Bastion's computer in Kingdom Hearts II. It is based on the Disney movie Tron, and is named after the video game created by Kevin Flynn in the movie. Along with being one of three worlds in the series that are contained entirely within another world.

Space Paranoids is a copy from the original ENCOM's server that hosted The Grid, which is a sleeping world that appeared in Kingdom Hearts 3D: Dream Drop Distance, and was based on the Disney film Tron: Legacy. It was from this world, in the past, that Ansem the Wise formed, for research purposes, Space Paranoids.

Both Space Paranoids and The Grid are based on the Tron franchise.

Space Paranoids is unlocked when you visit Hollow Bastion when its Battle Level is 28. You cannot enter the World by Gummi Ship. You must land at Hollow Bastion, go to Ansem's Study in the castle, and access the computer. From there, you can select your destination within Space Paranoids.

After Donald accidentally transports them in, Sora, Goofy, and Donald arrive in the digital world and are promptly arrested by Sark who escorts them to the Pit Cell, where Tron is being held prisoner by the Master Control Program; this room also hosts the Moogle Shop. After explaining the situation, the party escapes the Cell, heading for the Canyon, where they play a mini-game to unlock the terminal access. Further along and to the right is the Dataspace, where the password for the computer can be inputted.

Later on, the group delves deeper into Space Paranoids; the exit on the highest level and to the left leads to the I/O Tower: Hallway. Heading right takes the group to the I/O Tower: Communications Room, while going left takes them to the Simulation Hangar, where the Solar Sailer Simulation can be accessed. The Simulation takes the party to the Central Computer Mesa, which is the area just before the MCP's headquarters, the Central Computer Core.

Sora wished to unlock Ansem's computer files to find any information they can on The Organization or Riku. Stitch fell into the scene from the top of the wall onto the keyboard (literally), causing Donald to heatedly pursue the alien by jumping on the keyboard. Unfortunately, this alerted the MCP, and warned the party not to touch another button. But Donald is on the keyboard and accidentally steps on more buttons, resulting in the party being "arrested" and transported into Space Paranoids.

When the gang landed on Space Paranoids, they appear to have digital armor replacing their normal attire. They meet Sark, who sends them to a cybernetic prison: the Pit Cell. Here, they find Tron locked up as well. They join forces, and escape. Tron tells the company about his plans to stop the MCP, and Sora tells him that they are 'Users' from the real world.

The gang venture to a city in Space Paranoids, where they confront a group of Heartless who are wrecking havoc with the system. After defeating them, Tron acquires a way to send the gang back to Hollow Bastion. Before they leave, he tells them that they need the DTD (Door to Darkness) to access the data files. Sora learns the password (the names of the Seven Princesses of Heart) and returns to Space Paranoids.

Before meeting Tron, Sora and co. are forced to play on Sark's Game Grid. After a few Light-cycling games, they manage to escape and meet up with Tron (Sora's Light Cycle oddly resembles the type of Light Cycle in Tron 2.0). The gang then go to Dataspace to insert the password, but once the access is gained, the MCP attempts to take control of everything in it. Tron hacks into the system and changes the password to the names of Sora, Donald, and Goofy. They then depart to the I/O Tower, where the MCP has summoned the Hostile Program to "derezz" (delete) Tron and Sora. They fight the program and defeat it. Tron later uses the device in the tower to return the trio to the outside world.

Sora, Donald, Goofy, and Tron unlocked the files, but learned that the data files have become corrupt. Space Paranoids, though, would be at peace for a while.

In the second part of Space Paranoids' story, when the Battle Level is 42, the MCP is shown tampering with the defense systems of the town, and releasing dangerous data-based Heartless into Hollow Bastion. Cid works on a system to derezz the MCP for good. Sora must enter the computer and tell Tron to obtain it when it is ready.

Sora, Donald, and Goofy enter the computer once again and meet up with Tron on the Game Grid swarmed by an army of Heartless. After they escaped from the Game Grid, the four warriors flee to the I/O Tower, where the data to derezz the MCP is awaiting them.

After saving it onto Tron's Identity Disk, they go to the Solar Sailer and embark on a vehicle to travel to the Central Computer Core, where they fight and derezz both Sark and the MCP, thus ending the story of Space Paranoids, and subsequently Hollow Bastion.

In Space Paranoids, Sora, Donald, and Goofy, are converted into data and change forms accordingly. While one can vaguely tell what colors they were in the physical world, they all have a heavy blue tint. When Sora changes into his Drive Forms, the circuit patterns on his outfit alter color to match according to the form: they will change to red for Valor Form, blue for Wisdom Form, yellow for Master Form, white for Final Form, black/purple for Anti Form, and the circuits follow the colors of the Kingdom Hearts outfit for Limit Form - silver torso, red pants and yellow shoes. 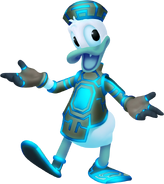