This article details a boss enemy; it also has a corresponding overview article: Sora's Heartless.

Sora's Heartless is a major boss in Kingdom Hearts coded. Data-Sora fights it in five phases, all immediately beginning after the previous phase.

Once the Datascape is ready to reset to its default settings, a warning arrives to tell Data-Sora and Data-Riku that something is messing with the data, causing the worlds to erase themselves; investigating, the source is revealed to be the recording of Sora's Heartless from Kingdom Hearts, which has evolved into a new and more powerful being thanks to eating glitches and the minds of the slain Heartless. Data-Sora fights valiantly against the digital copy of his dark half and is assited by Mickey in the final showdown, winning and saving the Datascape from erasure.

Sora's Heartless looks like a Darkside and fights very similarly, except that every move unleashes a Debug Attack. The left fist uses Blizzard (ice spikes come out of the ground), and the right fist uses Fire (a circle of flame spreads out). Focus on dodging attacks and then attack the fists when they are on the ground. The first phase of the series of battles is quite harrowing, so don't feel nervous about using a restorative ability or item.

Also be on the look out for the columns of light it unleashes after mimicking Darkside's chest blasts. Another attack used by this Heartless is that it will vanish and punch through portals on the ground to reach Data-Sora; best to dodge them until it bursts through the center of the floor and give it a good pounding.

Sora's Heartless is invincible under its shield. Notice that a white, ghostly Keyblade is hovering over the field. This is what you have to hit. If you can't find it, hold still a moment until it comes lunging at you. The target Keyblade is different from the ones Sora's Heartless attacks you with, but looks similar. It will use a shower of silver Keyblades to try slaying Data-Sora, but stay on the move and wait for a golden Keyblade to land. Run through the golden circle and gain a reaction command for the X button. Once used, Sora-Heartless will turn into a simple Shadow. Use a simple combo on the Shadow, and the second phase shall be cleared.

In the third phase, several copies of Sora's Heartless appear in the place of a single enemy. Dodge their attacks and wait for white, ghostly Keyblades to appear again. Hit the copies of Sora's Heartless while their shields are down to make them disappear. If you miss your chance, hit their Keyblades until they are open again. Repeat the Keyblade-hitting pattern against the last remaining copy of Sora.

Mickey is keeping the collective Data that Sora-Heartless accumulated at bay and separating it from the real Heartless. Sora's Heartless retains its weak Shadow form that you previously battled in the second phase. This battle serves as nothing more than an ending battle, and does not propose any challenge. Simply attack the Shadow a few times to complete the final phase of the battle with Sora's Heartless.

First, bring many long-ranged commands (because it is very hard to attack it at close range). Once you get past the Rail-Shooting, you'll find that Sora's Heartless has transformed into its Darkside form (similar to Kingdom Hearts coded). It can use its right arm to smash the ground, creating a fire-based shock wave which deals a great amount of damage and 3 fire balls which will slowly chase after you.

Another attack is using its left arm to smash the ground, which will produce an ice-based shock wave (it can freeze you). After it use its ice shock wave, it will create 3 ice pillars around its hand, making it harder to hit its hand. These two attacks can be avoided by standing far away from the Heartless and using long-ranged commands to attack its hands. Another attack includes Sora's Heartless shooting a column of light into the sky, which will summon many similar columns around you. If it hits, it will inflict Slow on you.

After its HP dwindles, it will disappear in light and punch you directly under the ground. Simply notice its circle of light and quickly dodge roll from it. If the punch misses, the boss's hand will be immobile for a while and open for a quick attack it. After several punches, the boss will prepare the explosion, you can attack it and deal more damage but the explosion will deal a great amount of damage back to you. To avoid this attack, quickly run to a corner and you will receive no damage from the explosion. Afterward, it will begin its attacks again. By using good-timed dodge rolls, this boss will go down in time.

After the attack ends, a Golden Keyblade will fall to the ground and create a yellow save-point-like area. Quickly run into it to receive an ability called Drag n' Drop which, if used, will transform the boss into its original form: a Shadow Heartless which is much easier to fight. By using the Drag n' Drop ability, this boss shouldn't be a problem.

Upon defeat in Phase 2, the boss powers up even more. These next phases are similar to the 2nd phase, except the boss can summon two clones to attack; they have little health, so it's best to slay them first to avoid getting confused as to which is the genuine enemy. The clones take extra damage, but while they're alive the main AntiSora enemy cannot be damaged. Note that the clones' Keyblade rain will not have the Golden Keyblade.

In phase 4, the Keyblade rain of the main AntiSora will last longer, and the Golden Keyblade will always fall in the center of the arena, striking you with a shockwave if Data-Sora is on the ground. Though it appears that Data-Sora has won, a cutscene will show that he has merely forced the Heartless back into its lumbering Darkside form. However, King Mickey arrives and saves Data-Sora from being erased by an attack.

In this phase, King Mickey will help you by using a beam of light from his Star Seeker to separate the true Shadow form of Sora's Heartless from the data it stole. A few strikes of the Keyblade will defeat it. A movie will play of Data-Sora and King Mickey shaking hands will play with Data-Sora sealing the way into the Datascape behind him; he leaves a message "Thank You, guys" to everyone on the outside world.

Sora's Heartless has a wide variety of attacks so be prepared. He has three attacks which are similar to Darksides but with a twist. He also has a fourth attack which he uses when he is nearly dead.

His first attack lets him punch the ground to the right of the battleground with his left hand (your right). As his punch makes contact with the ground, a shockwave of ice moves outwards, dealing damage and freezes you, so stay far away as this happens. His hand remains in a fist on the ground for a while like when fighting a Darkside. That gives you a chance to get close land a combo or two. Meanwhile there are three swirling circles are on the floor next to his hand which, for a while, causes no harm. However the circles eventually detonate like a bomb to release harmful crystals of ice which deals damage to you as well as freeze you if you touch it. For this reason be cautious about how long you spend attacking.

The second attack is like the opposite of his ice-punch. He punches the ground to the left with his right hand and sends of a shockwave of fire instead of ice which deals damage and inflicts burn on you. The real difference from the fire-punch and ice-punch is that while his hand remains on the ground, three fireballs float above. One by one they slowly follow you to attack you and inflict burn on you. However they can't travel a far distance and automatically explode after he travels about half the battleground. They can also be blocked. Both of these attacks are much like punches of Darksides when they summon Shadows.

The third attack he does is completely different from the other two attacks. It lays back with his shoulders apart and he's chest grows a glowing circle of light. Then five circles of light which seems to be placed completely randomly on the floor is placed. But if you look closely, the design on the floor are squares which separate the battlefield into a 3x3 grid. The five circles of light go randomly in the squares leaving four non-light circle squares. Run to any of these squares quickly because the circles of light eventually call harmful beams of light which strikes down on the squares with circles like lighting. It also causes slow on you and as the heartless repeats the attack several times afterwards, it is very dangerous as you may not get to a safe spot due to your slowness.

The last attack is used only when he is nearly or on his last bar of health. He goes down out of sight and then punches through the ground from beneath. His punches are always aimed at where you are standing so keep moving and do not try to attack in the short while it is exposed. If he does punch you he may inflict slow on you. Eventually he resurfaces by shining a big light on the battleground and emerging from the ground, revealing his body, head and arms, then quickly he goes back down and returns to his normal place. While this happens you can't hurt him but he can't harm you. After he carries on with normal attacks. He may do the attack again if he survives long enough.

The new Anti Form like Sora's Heartless has two main attacks and a third, special attack. He also does normal melee attacks.

He's first main attack involves him with three grey keyblades floating above his head. He shoots the keyblades at you one by one but the keyblades can be blocked.

He's second main attack involves three grey keyblades floating again. He spins the keyblades around his body which hurts you if you get very close and then the three keyblades burst out whilst spinning in a circles. If you are close it will hurt you so stay away.

He's final attack again involves keyblades but many grey keyblades and one gold keyblade. He rises high in the air, out of reach, and shoots many grey keyblades down at you which release tiny shockwaves with a small radius. To avoid great damage just keep running or better yet gliding. Eventually he shoots one final keyblade down which is gold. This sends another small shockwave but bigger then the shockwave of a grey keyblade. The keyblade stays for a while so that you can run to it and pick it up using the Drag'n Drop ability (which appears on your commands and replaces attack). You then automatically shoot a beam of energy from the keyblade at the Heartless to transform him into a weak Shadow. He can't do much as a Shadow and he receives more damage but he eventually reverts to his original form. 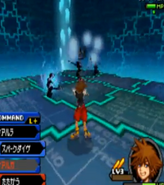 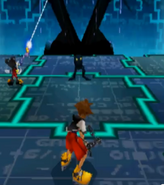 Phase 5
[coded]
Add a photo to this gallery
Heartless
Retrieved from "https://kingdomhearts.fandom.com/wiki/Sora%27s_Heartless/Gameplay?oldid=790440"
Community content is available under CC-BY-SA unless otherwise noted.