View source
watch 02:56
Raise a Floppa - The Loop
Do you like this video?
Play Sound
Article incomplete
This article is incomplete. You can help the Kingdom Hearts Wiki by adding Mirage Arena stats. Kingdom Hearts Birth By Sleep Final Mix image..

This troublemaker touts two styles: seek mode and attack mode. It likes to keep its distance. While in seek mode, the Sonic Blaster will shine a searchlight on you and try to lock on multiple times. Steer clear and strike first!
The Sonic Blaster is an Unversed that is found in Kingdom Hearts Birth by Sleep and Kingdom Hearts Birth by Sleep Final Mix. It has two modes, depending on its orientation: "seek mode" and "attack mode". When in seek mode, it projects its arm from its top, holding out a radar dish, and when in attack mode, it dangles its arm from its bottom, wielding a ray-gun.

While explaining the existance of the Unversed to Ventus, Vanitas summons several Unversed, including a Sonic Blaster. He later reabsorbs it and the other Unversed when he fuses with Ventus.

A Sonic Blaster, similar to the Trick Ghost, has two different forms; one that is right side-up and another that is upside-down. Its main body is bulky and conical, with a blue base, a black tip, and silver highlights. It levitates using a grey, conical turbine on its underside. This turbine has thee blue fan blades on it. A silver, metal piece connects a large, blue and silver satellite dish to the top of the Unversed. Its red eyes are set in a happy expression and the Unversed symbol is printed on the lower half of its main body.

The Sonic Blaster's alternate form sports an identical main body and turbine as its normal form, though it is upside-down. The only significant difference between the two forms is that the satellite dish of the first form is replaced by large blue and silver laser device. This device has a red tip and somewhat resembles a rocket, and is connected to the main body by a thick, red cord. Because it is flipped upside-down, the Sonic Blaster's eyes in this form seem to be set in an angry expression.

In Kingdom Hearts Birth by Sleep Final Mix, the Sonic Blaster receives a new red coloration, it's tips and highlight are a golden color.

The Sonic Blaster has a similar fighting style to the Search Ghost as it uses its satellite dish to lock on to enemies before switching to attack mode and firing lasers. When in attack mode, it can also attack players by whipping them with its tail. To beat one, simply use aerial attacks. Or, if attacked by a group, use Magnet to bring them together and finish them with the Bladecharge Command Style. 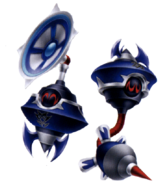