A weapon that draws forth its
wielder's personality.

Snowman is a Shield that can be wielded by Vexen in Kingdom Hearts 358/2 Days.

The Snowman shield is shaped like a hexagonal snowflake with a blue center, blue-white edges, and a sky blue outline separating the two sections.

Each corner has a long, thin spike on it. Superimposed over the face of the shield is the shield's namesake, a large snowman. This snowman is comprised of two white balls of snow, with two yellow buttons lining its front.

It wears a red scarf around its neck and has two, brown, three-fingered "hands" made of twigs. It wears a small, blue, cone-shaped hat on one side of its head. It has circular black eyes, a circular red nose, black, oval eyebrows, and a black, rectangular mouth.

The design, which is based on Vexen's true personality, represents both Vexen's frosty exterior and inner weakness.

Snowman's ground combo involves a push forward, a vertical slash from left to right, a vertical slash right to left and around Vexen's back, a push directly above Vexen, and a smash attack down completes the combo.

Snowman's air combo is a horizontal slash to the left, followed by the shield quickly rotating around Vexen, and a final push outward is the combo finisher. 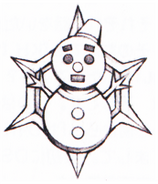 Artwork of the Snowman from the Kingdom Hearts 358/2 Days Ultimania
Add a photo to this gallery
Vexen's Shields
Retrieved from "https://kingdomhearts.fandom.com/wiki/Snowman?oldid=790424"
Community content is available under CC-BY-SA unless otherwise noted.