View source
watch 02:46
The Quarry - The Loop
Do you like this video?
Play Sound
Article incomplete
This article is incomplete. You can help the Kingdom Hearts Wiki by adding Improve Story Section.

A sniper. A high-ranking Nobody. It is very agile as it moves around defying gravity. Use magic to stop its movements for an easier battle.

It attacks using arrows of light. Ward them off with Warp Snipe. Use this in succession for victory!

Gravity's got nothing on these slippery sharpshooters, and as soon as you close the distance they'll warp right outta there. The good news? Blocking will send the arrows they fire straight back at them.

In bigger brawls, you'll want to make them a priority. A little magic goes a long way toward pinning them down until you can land some hits.

In the Land of Dragons, Sora follows the man in the Black Coat to the inside of the Emperor's Palace. He then asks him if he is Riku. The man reveals himself to be Xigbar from Organization XIII. He then summons a group of Snipers to attack them while he escapes. Snipers are then seen in other worlds such as The World That Never Was, and Twilight Town

A Sniper is a humanoid creature dressed in a primarily purple bodysuit. Its skin underneath is light grey. Only the Nobody's chin and neck are visible, the rest of its body being covered by its suit and the purple cap it wears. It also wears a black eye patch over the cap in the same place as Xigbar's own eye patch. Its suit also seems to sport pointed shoulders, much like Xigbar's coat.

Its arms bell outward near its elbows, making it look as if the Sniper is wearing gloves. A white Nobody logo is emblazoned on the right glove. There is a wide, light grey spike with a circular cut taken out of its bottom on either of the Nobody’s hips. Like all lesser Nobodies, Snipers have the ability to contort themselves. They are also often seen "standing" on empty space. All Snipers wield large crossbows reminiscent of Xigbar's Arrowguns, and can even shape shift its body into a massive version of the crossbow.

The Sniper's name is based on the Final Fantasy Tactics Advance job class of the same name.

Snipers move the same way their master, Xigbar, does. Rather than actually move their limbs, they will teleport around the field and shoot at Sora. They will seemingly stand on nothing and ready their crossbows to attack. These shots can be very accurate.

Their Reaction Command, "Warp Snipe", allows Sora to teleport in the same way they do, and literally bat the projectile back at the Nobody. If successful, it will hit the Sniper, damaging them, and rendering them defenseless for a while. What must be considered when facing multiple Snipers is that while warp sniping, Sora is still somewhat open to other sniper shots.

If given enough time, then Snipers will charge their projectiles, similar to the way Xigbar does, and will produce a bigger projectile. Once fired there will be a short delay, enough time for Sora escape the trajectory of the shot. If caught it will split into multiple shots and cause a significant amount of damage.

Reflecting the shot by using reflect or guard will instantly destroy the sniper, so it is good to use reflect when there are multiple snipers in the area. 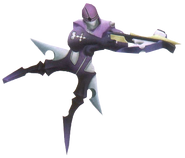