You can all come out now... I'm going back to face my past. I can use your help.

Simba is a courageous, yet occasionally low-self-esteemed ruler. He knows of his duty to rule the Pride Lands, but his fear of failure and disrespect often causes him to not do as well as he can. He is shown to be dependent, always wishing he knew what his father would do in times of crisis, seldom thinking for himself.

As an adult male lion, Simba bears a great resemblance to his father, Mufasa, the only significant difference between the two being that Mufasa's mane is longer, thicker, and darker. Simba has yellow-orange fur covering most of his body, except for his belly, paws, and mouth, which are peach-colored. His mane is rust-colored and parts on the right side of the top of his head. He has a tuft of fur the same color as his mane on the tip of his tail. Simba's eyes are orange and his sclera are yellow. His ears are partially visible poking through his mane, and he has eight dark whiskers; four on either side of his upper lip.

Upon summoning Simba in Kingdom Hearts, Simba appears in darkness, and bears resemblance to his father Mufasa, until he steps forward and is revealed in light.

When he is briefly seen as a cub in Kingdom Hearts II, Simba appears significantly different. His yellow-orange, cub fur is now pure yellow, he lacks his mane entirely, and the brown tuft on his tail is a bit less wild. Simba has large, circular ears that are rimmed with black as a cub and a scruffy patch of fur on the top of his head. Finally, he is, of course, much smaller in size than he is as an adult.

Simba appears as a Summon, using an attack called Proud Roar where Sora charges up the roar and fires off a powerful attack.

Though his world was destroyed, Simba's strong heart refused to languish in darkness, keeping his spirit alive and turning him into a Summon Gem, Earthshine. The gem was in turn found by Leon, who kept it as a "lucky charm", and was eventually given to Sora after Leon told him about the hearts of worlds.

After bringing it to the Fairy Godmother, she recognized it as a Summon Gem and immediately restored Simba's spiritual form, making him able to assist Sora in battles. After stopping Ansem, Seeker of Darkness, Simba's body was restored and he returned to his own world.

Simba reappears as a figment of Sora's memories, and he is once again a summonable character. He's the first Summon Card that Sora receives, given to him by Leon after finishing his tutorial and visit to Traverse Town. 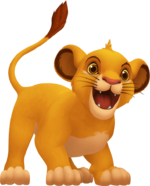 Simba was surprised to see Sora, Donald, and Goofy in the Pride Lands. He was more surprised that the three looked very different from when he last saw them, as they had taken on an animal form. He was even more amazed to find out that they had met his childhood friend, Nala.

Sora, Goofy, Donald, and Nala attempted to convince Simba to return to the Pride Land to overthrow Scar; however, Simba resisted until he met the spirit of his father, Mufasa who helped him rebuild his confidence. He returned to Pride Rock to find that Scar's hatred had turned Scar into a Heartless. After a battle on the top of Pride Rock, Scar was defeated, and driving the hyenas out, Simba took his rightful place as king.

However, the appearance of Scar's ghost caused Simba to have doubts, which made the other lions question his abilities as king. The apparition of these ghosts made Simba wonder if he could be a king just like his father was. Sora convinced Simba to follow his own path, and not his father's. With Sora's help he was able to overcome these fears, defeat Scar's ghost and become the King he was meant to be.

After Xemnas's defeat, Simba is seen standing on Pride Rock, with Rafiki holding Princess Kiara over the animal kingdom to show the animals the newborn cub. 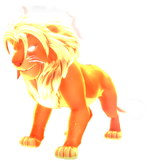 Simba becomes a Summon to Sora again after he obtains the Pride Heartbinder to assist him in his battles.

Simba's attack "Proud Roar" needs be charged. When charging, a ring grows around Simba. Any Heartless in the ring will be damaged when the attack is released, each time lessening the summon gauge. When the summon gauge runs out, Simba will be dismissed and the party members will return.

Simba appears in battle as a Summon Card when used and roars to deal damage to enemies in front of him. Stocking multiple Simba cards generates more powerful Pride Roar attacks, which stuns and increases the damage dealt to enemies.

The Simba card also plays an important role in activating Shock Impact, Quake, and the standard combination of Terror. Additionally, Simba can be used as part of magic sleights that require the use of any summon card, including Confuse, Gifted Miracle, Tornado, and the Halloween Town-exclusive version of Terror.

When fighting, Simba uses his claws and fangs to wound the enemy, and, like Tarzan, can cure using herbs and animal knowledge. He's an agility-focused fighter, but with good strength and defense.

Simba is a physical attacker with a handful of healing abilities. He attacks very rapidly in battle using, as one would expect, his claws and fangs. He has no armor slots, two accessory slots and three item slots. Simba's abilities in Kingdom Hearts II are as follows:

Simba's Link is known as "King's Flare". Sora rides on the back of a large fiery Simba, who can either pounce on enemies with "Firaga Leap", or let out "Firaga Roar" to deal fiery damages to surrounding enemies. By choosing the finish the summon with a final attack, Simba will leap into the air, spin in suspension until he bursts in a blazing explosion.

Simba first appeared appeared in the 1994 film The Lion King as the main character of the movie. At the beginning, Simba is a young cub. Near the start of the film, his evil uncle, Scar, murders his father, Mufasa. Because Simba believes that it is his own fault that his father is dead, he flees to the jungle. Later in the film, Simba returns, defeats his uncle, and takes his rightful place as king of Pride Rock.

"Simba" is Swahili for "Lion".