Shadow Stalker
A Heartless that attacked Belle in Beast's Castle.

It jumped around on the floor, pillars, and chandelier of the ballroom, creating mayhem.

Dark Thorn
A liberated version of Shadow Stalker that appeared in Beast's Castle.

It appeared and disappeared while running wild, creating a chaotic battle for Sora and his friends.
Darkball
Possessor

The Shadow Stalker, and its second form Dark Thorn, is a Heartless enemy which can be found exclusively as a boss in Kingdom Hearts II.

The Shadow Stalker's body is a black sphere with several twisted tentacles sprouting out of it. Two of these are large, each sporting two metal bands around them, while the rest are smaller and placed more haphazardly around the Heartless's body. The tips of all of these tentacles are orange. The Shadow Stalker's jagged maw is red on the inside, and its eyes are eerie, glowing, yellow circles with pitch-black rings around them. The most prominent feature of the Heartless are the two chains wrapped around its body, with each end of both chains attached to a conical weight. The Shadow Stalker is vaguely reminiscent of the Darkball Heartless. The Dark Thorn is a massive creature with black skin. Its entire body is wrapped in teal thorns, possibly a reference to the Beast's rose, and both of its wrists and ankles still have manacles on them. The chains on its arms are broken, but the chain connecting its feet is not. Like many other Purebloods, the Dark Thorn has a heart-shaped hole in its chest. The Heartless has a large, red, toothy maw and beady, glowing yellow eyes.

While it is muscular and has large hands and feet, it also has rather thin limbs. Each of its limbs sports three digits with long, red claws. The Dark Thorn also has two enormous, orange horns and a massive, orange mane. According to Nomura, the Dark Thorn's design is based off of the Final Fantasy X version of Ifrit.

However, when it is driven from the walls, its chains are released and it transforms into the monstrous Dark Thorn. In this new, powerful bestial form, it attacks the party ferociously with furious attacks and its ability to become invisible. Sora, however, is able to use the very elements that the Heartless had recently possessed to beat it into submission. The Heartless fades back into darkness and Xaldin leaves the castle to reform his plan.

While the Beast and Belle reunite after the attack, Sora speaks briefly with the servants of the castle, then opens the gateway to the next world.

Sharing the same ability as the Possessor Heartless: it can possess and animate any inanimate object. When in desperate need, it cocoons itself and transforms into the ferocious Dark Thorn.

More agile and erratic, attacking enemies with its claws and sometimes using the chandelier to hit opponents. It can also summon Possessors to attack Sora and can turn invisible to elude foes, an ability shared with the Stealth Sneak.

This is one of the battles where it is possible to be saved by King Mickey.

(1) MP Ball x 10, (3) MP Ball x 5[2]
The Shadow Stalker will possess the various parts of the ballroom during the encounter to attack the party;

Once you have depleted the HP of the chandelier or pillars, the Release reaction command will appear. The Shadow Stalker will fly out of the object it was possessing, releasing Drive and MP Orbs.

Take this opportunity to bombard the enemy with attacks. This process will continue until victory is obtained.

Don't use Beast's Limit or Valor Form yet, as he will annoyingly possess an object, therefore wasting it. Save it for Dark Thorn who is a much bigger target.

This boss battle would be relatively easy if it wasn't directly after the Shadow Stalker (giving no time to save and recover in between). This battle requires noticeably less strategy than the Shadow Stalker and is more of a straightforward assault.

Despite the fact that Dark Thorn turns invisible, it is still able to be targeted - this being a boon to players during the battle. However, it is more agile when invisible and the fight becomes much easier when the invisibility is lost following the use of the Stepvault Reaction Command, during which Sora will jump onto the chandelier, and, following another command, lower the chandelier and swing it about in circles, hitting the Dark Thorn and rendering it visible. Following this somewhat-dramatic assault, the battle becomes considerably easier, as the boss moves more slowly. The Dark Thorn is also able to summon Possessors to attack Sora. 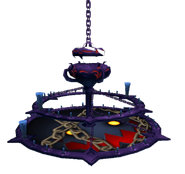 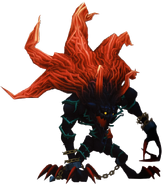