The Seven Dwarfs are protagonist characters featured in Kingdom Hearts Birth by Sleep. Their names are Doc, Grumpy, Happy, Sleepy, Bashful, Sneezy, and Dopey. They appear along with Snow White in their homeworld, Dwarf Woodlands.

The Seven Dwarfs are all roughly the same short height (about half the height of Aqua) and they all wear tuque-like hats, jackets with patches on the elbows (except for Doc, who rolls his sleeves up, obscuring the elbows, and Happy, who wears a vest and undershirt with patched elbows), and brown, sock-like shoes. Except for Dopey, they all have beards and eyes that are a shade of brown or amber. The tops of all their heads are completely bald.

Doc is a bit overweight and sports a thick, but short, white beard. His hat is yellow and stands on end for an unknown reason, a trait shared in both Bashful and Happy's hats. He has a large, round, pink nose and is the only Dwarf to wear glasses. He wears a red coat with two gold buttons going down the front, brown pants, and a black belt with a gold buckle around his waist. Doc rolls the sleeves of his coat up.

Grumpy is rather thin in comparison to some of the other Dwarfs, and has the largest, most bulbous pink nose out of all the Dwarfs. His thick, white beard reaches to just past his waist. His tuque is brown and the tip flops down. His coat is carmine colored and secured by a black belt with a gold buckle. The patches are brown, as are his pants.

Happy is the fattest Dwarf and seemingly the oldest, as he has thick, white eyebrows in addition to his white beard, as opposed to all the other Dwarfs having black eyebrows. His beard is identical to Doc's. Happy's tuque is orange and stands on end and his round, pink nose is the second smallest out of the Dwarfs. His pants are steel blue, and he wears a red vest overtop a yellow, long-sleeved shirt with tan patches. Happy wears a black belt with a silver buckle.

Sleepy wears a light steel blue tuque that flops down and is a bit longer than those worn by the other Dwarfs. His round, pink nose is roughly the same size as Doc's and his thick, white beard seems to be the longest out of all the Dwarfs (though Bashful's beard may be the same length). He wears brown pants and a tan jacket with brown patches. His belt is black, but the buckle is obscured by his beard. Sleepy's eyes are usually half-closed.

Bashful wears a steel blue tuque that stands on end and has a thick, white beard that reaches to about knee-length, roughly the same length as Sleepy's beard. He appears to have the second largest nose out of the Dwarfs and wears a yellow-orange coat with tan patches. Like Sleepy, Bashful wears a black belt, but the buckle is covered by his beard. His pants are an orange-brown color.

Sneezy has a thick, white beard that reaches to about chest-length and wears an orange tuque that droops in the same manner as Grumpy's. His round, bulbous nose is just slightly smaller than Bashful's. His coat is dark brown with brown patches and sports at least one gold button. His belt is black and the buckle is gold, while his pants are brown.

Dopey seems to be the youngest Dwarf and wears a purple hat along with a light green coat with two gold buttons down the front. His hat and coat seem to be a bit too large for him, and his goat partially covers his black, gold-buckled belt. The patches on his elbows are brown. His pants are steel blue and his nose is the smallest of the Dwarfs. Dopey's eyes are blue and he has large ears; in fact, he is the only Dwarf whose ears are visible. Dopey is completely bald underneath his hat.

The Seven Dwarfs appear in their homeworld of Dwarf Woodlands, living a peaceful life in their cottage in a clearing within the forest. While working in the nearby mines, they encounter Ventus and mistake him for a jewel thief. All of the Dwarfs except Dopey try to drive him out, but Ventus gets the better of them and manages to obtain information on where to look for his friend Terra, though they are still hesitant to trust him.

The dwarfs later return to their cottage to find Snow White there, learning how she met Terra and was attacked by Unversed. The Dwarfs conclude that Terra was controlling the monsters, but Ventus insists Terra wouldn't do such a thing. Later, Snow White falls into a deep slumber after taking a bite from The Queen's poison apple, and the Dwarfs place her in a glass coffin to mourn her. However, thanks to assistance from Aqua and the Prince, Snow White is able to awaken, and the Dwarfs celebrate as she departs with the Prince.

During the ending credits, the Seven Dwarfs gather around Snow White and the Prince in the clearing and throw beautiful flower petals over them, as though to make a beautiful scene for the lovers.

On September 29, 2017, Ryūji Saikachi, the Japanese voice actor of Rafiki, passed away at the age of 89 due to congestive heart failure. 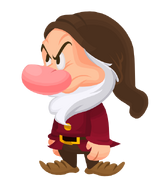 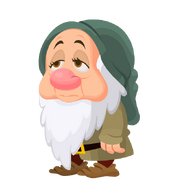 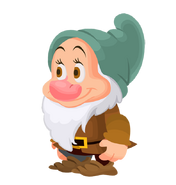 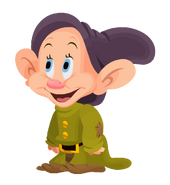