Absurd. Defeating me is meaningless. You know that more than anyone, Cloud. No matter how many times I fall, your darkness keeps calling me back!

Sephiroth's personality is one of cold ruthlessness. He is uncaring, having no sympathy for anyone but himself, laughing and grinning at Cloud, seeing him as almost no threat. Sephiroth has been shown with stoic and melancholy personality traits, along with a drawling voice. He is incredibly powerful, both physically and mentally. He is convinced his power surpasses anyone else's. He is shown to have no emotion, never overreacting to anything.

Sephiroth's appearance in both Kingdom Hearts and Kingdom Hearts II is largely the same as his appearance in the various games of the Compilation of Final Fantasy VII, though with a few significant differences. He has his distinctive long, silver hair with long bangs that frame his face, and dresses in a black leather coat. The coat has a large collar that reaches his ears even when folded back and is kept closed by a black belt with a silver buckle around his waist.

Unlike in the Final Fantasy games, Sephiroth's coat has red-violet lining in the front. It is also noticeably more tattered in the Kingdom Hearts games. In Kingdom Hearts, Sephiroth also has regular blue eyes, unlike the green, catlike eyes he and his Remnants have in the main series. The sleeves of his coat end in metal rings in place of normal cuffs, and he wears black leather gloves. For some reason there is an odd, black and red, fin-like growth on his right forearm. Sephiroth's face looks strikingly like Cloud's, which is something that Goofy comments on in Kingdom Hearts II. This similarity would explain Sephiroth's difference in eye color from his original incarnation.

Sephiroth's chest is exposed, showing that he wears some sort of grey strap around his abdomen with two black belts over it, as well as two brown, overall-esque straps that intersect over his chest. He wears black pants and knee-high boots of the same color, with two grey belts wrapped around each boot. He wears a silver pauldron over each shoulder, both of which closely resemble the pauldrons he wears in the Compilation of Final Fantasy VII series.

In both games, Sephiroth sports a large, navy blue wing on his right shoulder, a design feature that has carried over to several characters associated with Jenova in the Compilation of Final Fantasy VII. In Kingdom Hearts II, he gains two more wings of the same color sprouting from either of his hips. Also in both games, Sephiroth carries his iconic weapon, the Masamune (which is a katana with a massive length but thin width, making the sword resemble a Nodachi), as his weapon. Sephiroth is also one of only two characters who did not reappear in their Advent Children attire, the other being Cid.

Sephiroth appears in the limited-time quest "Dark-Winged Warrior." While in the Olympus Coliseum, the Player sees Cloud, who holds up a black feather and states that "he's here." Cloud later fights the Player, telling them not to take it personally. When the Player beats Cloud, he tells them the loss won't change his fate, and he'll "face him someday." Hades also fights the Player, since Hercules has not shown up to the Coliseum. Upon reaching the last stage of the quest, the sky darkens and a laser beam of light hits the ground in front of the Player. The light fades to reveal Sephiroth in a kneeling position. Sephiroth stands and wordlessly prepares to fight the Player. Upon defeating him, Sephiroth notes that "you share a connection with him," with "him" likely referring to Cloud. He tells the Player they can find him there "when the time comes," then leaps into the air and flies away.

Sephiroth also appears as various medals that can be used in battle.

Although Sephiroth does not actually appear in Kingdom Hearts Birth by Sleep, during the credits a black feather falls before Zack at the Olympus Coliseum, hinting the presence of Sephiroth. Also, Zack mentions to Terra that he aspires to become a hero like "another"; Nomura has confirmed that he was indeed referring to Sephiroth.[1]

During the Platinum Match at Olympus Coliseum, Sephiroth appears and fights Sora. He is a secret boss available in all but the original Japanese version. After having been defeated by Sora, Cloud finally meets Sephiroth. In silence, Sephiroth implores Cloud to turn to the darkness, which Cloud refuses. The two engage in a high-speed battle in the air, the outcome of which is unknown; however, this is only in the Kingdom Hearts Final Mix.

In the original Kingdom Hearts, it is never shown that Sephiroth and Cloud ever meet, or that Cloud is even aware Sephiroth is a challenger in the Olympus Coliseum.

Right before the invasion of Hollow Bastion, Cloud warns Sora and company about Sephiroth, and his ways of the darkness. Later, as Sora exits the castle to go help defend against the invasion, Sephiroth appears. He asks about Cloud's whereabouts, and although Sora says nothing, Donald and Goofy retort that Cloud realizes that Sephiroth is the manifestation of his darkness. Seeing that Cloud is becoming enlightened and desires to fight him, Sephiroth takes his leave.

During the battle, Cloud is surrounded by Heartless, but Sephiroth intervenes, defeating them all in one swipe. Cloud intends to defeat his nemesis to escape the darkness, but Sephiroth only replies that Cloud will never be able to do so, and will always cower in the light. Cloud vehemently denies his dark half's claims, but Sephiroth is undeterred, and leaves just as Tifa arrives.

After the Master Control Program is defeated, Sora encounters Sephiroth at the Dark Depths in Hollow Bastion. The villain again asks about Cloud, but Sora and his companions do not reveal anything. He then inquires about Sora, Donald, and Goofy's identities, but again, they refuse to answer. Sephiroth then notices Sora's Keyblade, and attacks, intending to test Sora's power and that of the Keyblade.

Even though Donald and Goofy are with Sora when you confront Sephiroth, they do not fight against him with Sora since Sephiroth only wishes to battle with the Keyblade master. Sora appears to overcome him, but Sephiroth just shrugs off the battle. Sephiroth compliments Sora on his skill with the Keyblade but says that Cloud is the only one that can "eliminate him". Sephiroth then tells Sora to find Cloud so that they can settle their feud.

Cloud arrives later, and a battle begins, with Sephiroth desiring to draw Cloud into the darkness. However, Tifa protects Cloud, saying that Cloud does have light in him, and that, even if he doesn't, then he just needs to be surrounded by light. Nevertheless, Sephiroth and Cloud start off for another battle, and after Tifa's intervention, Cloud glows in light, surprising Sephiroth and letting his guard down. The two disappear in a brilliant flash of light. Their location and status are unknown.

Despite the fact Sephiroth and Sora can battle in Kingdom Hearts, they show no recognition for each other during their dialogue in Kingdom Hearts II. Sephiroth is, however, at least somewhat familiar with the Keyblade, as he says to Sora, "I see. So that's a Keyblade. And I suppose you must be its chosen wielder?" His battle quote, "show me your strength", demonstrates that in his battle with Sora he wished to test his power, and see the Keyblade in action.

Sephiroth is considered to be among the most powerful villains in Kingdom Hearts series as well as among the most difficult bosses in all the times he is fought as a boss, with his boss fight in Kingdom Hearts rivaling Kurt Zisa and Phantom and ranking below only the Lingering Will in Kingdom Hearts II. All of his attacks are extremely powerful and easily has the potential to be capable of killing Sora even with maxed stats and his HP is also ridiculously large. He can be argued to be the most powerful of the Final Fantasy characters in the series, as although Cloud stalemates him, it is implied that he was holding back as he wasn't actually intent to kill him but rather to make him give in to the darkness and he easily fights off Tifa. Although Sora is able to defeat him, in both times they fought, Sephiroth suffers little-to-no damage and is even able to calmly wipe at his shirt while acknowledging Sora's abilities, indicating he wasn't fighting to kill.

An exceptional master swordsman, Sephiroth is capable of effortlessly wielding a long blade known as the Masamune with great skill and combining his teleportational abilities and great speed as well as flight to perform devastating combos both in the ground and mid-air. He also can move at high speeds while slashing at all directions without fail and use a variation of Cloud's "Omnislash" called "Octaslash", where he flies around the arena slashing widely. He can empower himself with an aura of dark energy when weak, greatly increasing his speed and attack potency, as well as charge his blade with energy to make a single slash extend into numerous slashes.

Sephiroth also is capable of casting extremely powerful magical attacks that resemble his old Final Fantasy self, using "Stigma" to summon gigantic pillars of flames that can suck matter in, "Shadow Flares" to fire orbs of darkness, and his most powerful attack "Super Nova" calls down meteors that spin around him and then explode. His most noticeable technique is "Heartless Angel", an attack that drains Sora's MP and leaves Sora with 1 HP, if he is not interrupted in time; this is immediately followed by "Flash", which is fatal unless blocked via Reaction Command.

In Kingdom Hearts, Sephiroth is immune to almost all forms of magic, although magic-based attacks such as Ragnarok do in fact cause damage.

In Kingdom Hearts II, all attack magic has no effect as well. The only magic based moves that will affect him are Magnega, the aftershock of Reflega, and the magic combo of Trinity Limit. In Kingdom Hearts II Final Mix, all Limits in Limit Form work well against Sephiroth.

Sephiroth debuted as the main antagonist in Final Fantasy VII. Once revered as a great hero, his discovery of the mysteries surrounding his origins and nature drove him to insanity. Sephiroth then aspired to become a supreme being and attain godhood.

One-Winged Angel is the name of Sephiroth's theme in the Kingdom Hearts series and most of his appearances throughout the Final Fantasy series. The song originally appeared at the end of Final Fantasy VII as the final boss theme, played during the battle with Safer∙Sephiroth, alluding to his black wing. As a result to this allution, Sephiroth was designed for Kingdom Hearts with a black wing emerging from his right shoulder, a trait that was latter carried to the Compillation of Final Fantasy VII.

The song is one of the most recognized tracks in the Final Fantasy series, unseating Sephiroth's original theme, "Those Chosen by the Planet." To that extent, the song and its title have become synonymous with Sephiroth even since his appearance in Kingdom Hearts, and "One-Winged Angel" has been used not only as the name of the song, but as a title for Sephiroth himself.

The song was remixed from the original song for Kingdom Hearts and Kingdom Hearts II. The remixes of the theme feature much shorter intros, leading almost immediately into the Latin vocals, and the vocals as a whole are more prominent than in the original version. 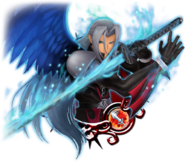