Selphie is a minor character in the Kingdom Hearts series.

Selphie seems to be a typical "girly-girl", as she is carefree, fights very scarcely with her jump rope, and overall acts like a little girl. She also seems to be a romantic of sorts for when you talk to her a second time on Destiny Islands she mentions how romantic the Paopu Fruit legend is. Her romantic nature is heightened when Kairi (after talking about Riku) tells her she is sending a letter to the "other boy", who turns out to be Sora—Selphie is rather charmed by Kairi's idea.

In Kingdom Hearts, Selphie has almost the exact same appearance as in her original game, Final Fantasy VIII, albeit she is younger here. She wears an odd, yellow dress with overall straps and a large pocket on the chest. Minor changes to Selphie's appearance include her original brown boots changing to sandals and the black electrical tape she originally wore on her left wrist being replaced with a loose, blue beaded bracelet. Selphie's eyes are green and she uses a jump rope as a weapon, referencing Selphie's original weapons in Final Fantasy VIII, Nunchaku. She also retains her peculiar hairstyle; brown hair styled into one large curl on the back of her head and two more on either side.

In Kingdom Hearts II, a slightly older and noticeably taller Selphie is briefly seen in a school uniform similar to the one Kairi wears. However, Selphie wears her uniform straight, unlike Kairi, who rolls her sleeves up. Selphie wears a short-sleeved white polo shirt, a plaid, sky blue tie, a pleated skirt of the same color, navy blue knee-high socks, and black shoes. She also wears a small brown strap around her left wrist in lieu of her bracelet from Kingdom Hearts. Another accessory of hers is the "moogle bag", which she is seen with for a mere moment in Kingdom Hearts II.

In Kingdom Hearts Re:coded, Selphie's thighs are noticeably larger, giving her "quite an adult impression". This is due to a mistake among the developers, though they ultimately decided to keep the change.[1]

Selphie is a resident of the Destiny Islands and a friend of Sora, Kairi and Riku. She spends most of her time with Tidus and Wakka.

She is one of three to ask Sora a question that helps determine his leveling pace during his Dive into the Heart in the Destiny Islands area.

What is most important to you?

This can be answered with either A) being number one, B) friendship, or C) my prize possessions.

Like Tidus and Wakka (also from the Final Fantasy games), you can challenge her for exp. She uses a jump rope (a would-be toy counterpart of her original incarnation's weapon, a nunchaku) to attack, and is probably the fastest out of the three. However, her attacks are easy to block and counter, which means more exp. However, her speed may annoy impatient players, as she sometimes dodges attacks easily.

When the Heartless destroyed Destiny Islands, her whereabouts were unknown. The most possible answer to this is that she disappeared along when the islands were destroyed. But thanks to Sora she was able to return along with Destiny Islands. She is last seen playing with Wakka and Tidus after the island was restored in the end credits.

In the ending credits of Kingdom Hearts Re:Chain of Memories, the real Selphie is shown playing on the beach with Tidus and Wakka while Kairi looks at the Small Island. 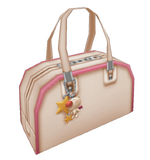 Selphie is the only other islander apart from Sora, Riku and Kairi to appear in Kingdom Hearts II. Like the other characters, she is shown to have forgotten Sora as a result of Naminé's manipulations. She is a schoolmate of Kairi's as she is seen wearing the assumed school uniform.

She offers for Kairi to go to the kids' island after school one day and Kairi reveals that she promised herself not to go to the island until she remembers the boy's (Sora's) name. And although Selphie has no memory of Sora, she does believe Kairi's story of his existence. This also hints that Kairi has romantic feelings for Sora, because she can't bring herself to "betray" Sora by going to the island when she can't even remember his name.

A data version of Selphie appears in Kingdom Hearts coded, alongside Wakka and Tidus, all of them made of data. She asks the Data Sora to destroy the block and gives him a Hi-Potion for doing so. 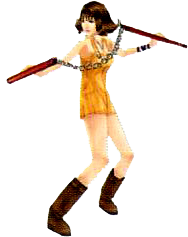 Selphie Tilmitt was originally a major character from Final Fantasy VIII, in which she is a classmate of Squall's at Balamb Garden, having recently transferred from Trabia Garden. She wields Nunchaku in battle, and her Limit Break, "Slot", allows the player to cast a random spell numerous times.

Selphie was the second character that Nomura drew, after Squall, intentionally giving her an impractical hairstyle. When he first designed Selphie, Nomura drew her in overalls; however, he realized that none of the characters would be wearing a skirt. In the end, he gave Selphie a mini-skirt and let Quistis have pants.