Seifer is a Final Fantasy character in Kingdom Hearts II, who resides in Twilight Town. Seifer is always seen with his posse Fuu, Rai, and Vivi. He shares a rivalry with Hayner and his gang, and often picks fights with them.

Much like the original Seifer of Final Fantasy VIII, he is cocky, sarcastic, and a self-proclaimed protector of order, or at least, his idea of order, which is just bullying people into following what he says.

Seifer appears as very brash, rude, and taunting. He signifies himself as the "protector of the town". Seifer's personality contrasts in small ways from his personality in Final Fantasy VIII where he played as Leon's rival. His personality is more childish and a lot more brash than in his Final Fantasy version. This is probably reflective of his age. Although he often seems like a bully, he is shown to care about the town and is nice to Roxas or Sora when he sees fit.

Seifer often makes allusions to his character in Final Fantasy VIII. For example, Seifer calls Roxas a chicken wuss; this is a reference to his derogatory nickname for the character Zell Dincht on various occasions in Final Fantasy VIII. There also is an alternate cutscene if you lose the first battle with Seifer. This is likely a reference to him and Leon (Squall), because of how there was an alternate cutscene for Leon also. The fact that he is the leader of the Twilight Town Disciplinary Committee also could be considered a reference to his original game, where he was the leader of the Balamb Garden Disciplinary Committee.

Seifer has a very defensive fighting style as he is always in a guard stance. He parries attacks quite easily and focuses on countering. He has the same battle stance as he did in Final Fantasy VIII, but his attacks are much less impressive. He can perform a basic slash and a spin attack. He can also leap high into the air and come down club first.

Seifer's clothes are slightly based on his Final Fantasy VIII original version, but redesigned to match with his age and new style, that includes a black tuque with the "Ore" kanji (which is a distinctly masculine and sometimes vulgar way of referring to oneself). He wears a blue crop-top vest with white lining underneath a floor-length white jacket. This jacket resembles the one he wore in Final Fantasy VIII, though it lacks sleeves and the red crosses it originally had. He has baggy, aubergine colored pants, with the legs tucked into black combat boots with light blue laces. Seifer's eyes are blue-green and his hair, partially visible under his hat, is blond.

The scar Leon gave him in Final Fantasy VIII is also shown in the game, and it is the mirror of Leon's. It is unclear why Seifer has the scar here. In Kingdom Hearts II, Seifer's gunblade "Hyperion" is replaced with a Struggle Bat which he uses for all battles, but wields it in a similar stance to how he wielded Hyperion.

Seifer is the leader of the Simulated Twilight Town's Disciplinary Committee which includes his followers Rai, Fuu, and Vivi.

He appears to be a rival of Roxas, always calling him a chicken-wuss and picking fights with him and his friends. He is also the town's Champion for the Struggle Tournament in Twilight Town. Seifer is the first evidence of a malfunction in the virtual world by how when he taunts Roxas it appears slow and strange. He can be considered one of Twilight Town's two bosses alongside Axel. In the digital Twilight Town, Hayner, Vivi, and Setzer can only be fought once. Seifer, however, can be fought an infinite number of times.

In the real Twilight Town, when he meets Sora, Donald, and Goofy later in the game, he treats them like Roxas in the simulated Twilight Town. However, when they save him and his gang from trouble, he gives them the Struggle Trophy, a sign of great respect. Seifer can also be fought in a Struggle battle after beating both Hayner and Setzer ten times each.

In Twilight Town, random NPC chatter reveals he went on "some warrior's journey" with Fuu and Rai, explaining his and their absence from the game's story. 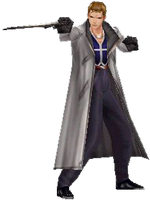 Seifer Almasy is a classmate of Squall Leonhart in Final Fantasy VIII, as well as his chief rival. Like Squall, Seifer was one of the very few people to wield a Gunblade, his model called the Hyperion. Leader of the Balamb Garden Disciplinary Committee, he was close friends with fellow students, Raijin and Fujin.

Seifer was also training to become a SeeD member but was unable to make the cut due to his rash attitude and rebellious nature. He later on becomes a regular antagonist after being swayed by the main antagonist, the Sorceress known as Ultimecia, as it was his 'romantic dream' to become a Sorceress's Knight.

Although he and Squall are enemies in their original game, they never meet or even see each other in the Kingdom Hearts series.