Ruler of the Sky

You need to destroy all the tail segments of this avian Heartless to reveal its core.
After each segment is destroyed, the Ruler of the Sky will glow red and charge its foes. Wait too close to the water's surface and it will fire a salvo of water shots.
Once the core is exposed, avoid the spray of coins and counter with Fire magic.

The Ruler of the Sky is an enemy which can be found exclusively as a boss in Kingdom Hearts 358/2 Days.

The Ruler of the Sky resembles a large, skeletal parrot. Its body is covered in violet plumage and it has a jeweled, gold collar around its neck. Its tail is comprised of several skulls linked together, while its wings are comprised of four gold cutlasses with alternating violet and red gems set in their guards. The topmost cutlass in each wing ends in a hook, and none of the cutlasses are actually connected to each other. The Ruler of the Sky’s head sports yellow eyes and a jeweled, violet and gold crown.

Its mouth is comprised by a brown treasure chest filled with gold coins with gold lining and black spikes acting as teeth that the Heartless has clenched in its beak. Its Heartless emblem is on its chest. The Ruler of the Sky incorporates many traits that are homages to stereotypical pirates, such as parrots, skulls, cutlasses, and treasure.

The important thing to remember, when facing the Ruler of the Sky, is to not underestimate the boss's true power. At the start of the battle, immediately Lock-On to the Heartless. You must chase it around while airborne, so attack whenever possible. The best time to strike is as the Ruler is turning. The Ruler of the Sky will be slightly faster than you, so equipping a leveled-up Glide ability and a good midair weapon will make it easier to keep up and land hits. Be careful if you find yourself behind the Ruler of the Sky, as it will cause pillars of ice to shoot up in its wake and it will release homing balls of energy from the end of its tail. The energy spheres will drain your HP on impact.

After sustaining about half a bar of damage, a segment of the Ruler of the Sky's tail will break. At this point, the Ruler of the Sky will enter a berserk state and glow with a pink aura. It will also release a burst of energy as it begins its berserk attack. The Ruler of the Sky will begin swooping back and forth in an attempt to hit you. Occasionally it will release a homing ball of energy when it begins its rush. If you fly too close to the water, it will drop homing energy balls in rapid succession. Try to dodge downwards and to the side to avoid its rush without going too low. If you do go low, use the terrain to your advantage to avoid the energy spheres.

After rushing several times, the Ruler of the Sky will dive into the ocean. When this occurs, wait for it to resurface and watch your map. Try to keep out of its range, as the Ruler of the Sky will begin firing coins from its treasure chest-like mouth. Interestingly enough, if you are hit by the boss's coin shot attack, you will collect the munny that hit you, yet, they still inflict damage on you. Staying low will allow you to avoid this attack. While it is firing, the Boss will move away from you if you try to approach it, so try not to push it outside the area boundary. You can also glide to the backside of the Heartless and you can attack it while it is busy firing coins. When it stops firing, it will be stationary for a short time, so start swinging at the tail. Soon the Boss will begin flying like before, so repeat the previous strategy until all four tail segments are destroyed.

When the tail has been destroyed, the Ruler of the Sky enters a new berserk state. It will begin flying around the area, circling you with iceberg towers and firing energy sphere after energy sphere. To best avoid its attacks, fly in the opposite direction as the Boss, taking care to avoid the icebergs.

Avoid this attack by flying directly away from it. The Ruler of the Sky pauses for a few seconds after it finishes this attack, giving you an extra opportunity to deal damage. After that it will return to its second berserk state, so repeat the second part of the strategy until the Heartless falls.

As always, equip plenty of healing spells and items, particularly Cura as it replenishes your HP while you move, as well as multiple casts of Fire magic. Equipping rings that protect against ice or water will help. Make use of your Limit Break, and equip a weapon with powerful strikes, as the Ruler does not stay still long enough for combo-based weapons to be effective.

A possible strategy to follow is to bring a large number of high-level Fire and Firaga casts, as well as Hi-Ethers and Elixirs to replenish your magic. During the first phase of the battle, use Fire to inflict damage on the tail segments, as its homing capability will make it easier to connect with the target. After the tail is destroyed, use Firaga at close range to inflict a great deal of damage to the Boss's core. So long as the player heals regularly, uses items as needed, and uses Limit Breaks if needed, then the Ruler of the Sky should fall relatively soon. 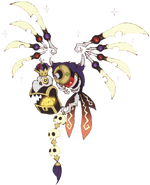