The Rock Titan is a gigantic, bulky creature that seems to be composed entirely of rough, uneven stone. Its body is very large and barrel-shaped. His legs are short and his feet are flat, while his arms are relatively long and end in four-fingered hands.

He has two comparatively small, draconian heads placed side-by-side on the top of his body. Both heads have thick necks, a peculiar lower jaw with four very large, blunt teeth. His eyes are very small and red, and the inside of both mouths are red as well.

The Rock Titan appears as the last boss in the Hades Cup at the Olympus Coliseum.

The Rock Titan makes a cameo appearance in Kingdom Hearts II during the opening cinematic for the Olympus Coliseum. However, he isn't credited in Jiminy's Journal.

Rock Titan appears at the Olympus Coliseum as the boss on Layer 15.

The Rock Titan, along with his brothers, Tornado Titan, Lava Titan, and Ice Titan, were released by Hades just as Sora, Donald, and Goofy found their way to Olympus. Together, the four Titans destroyed Thebes and made their way to Mount Olympus to wage war with Zeus and the other gods. Along the way, Rock Titan stayed behind to fight Sora, Donald, and Goofy throughout Mount Olympus' mountainside. Despite being defeated and falling off the mountain, he reappeared just as Hercules decided to even the odds and was able to free Zeus from his rocky tomb, much to Hades' dismay. Zeus began to attack the Titans who immediately started retreating. Hercules reversed Tornado Titans vortex, sucking up Lava Titan, Rock Titan, and Ice Titan, and throwing them up into the atmosphere.

Lock on to one of the Rock Titan's big feet and attack him with combos (such as Ars Arcanum and Graviga). When the Rock Titan falls on his back, use the Superglide ability to float to one of the heads and attack from the far side. Be careful though, as the heads will swing at you; Dodge Roll/jump to avoid damage. Beware of the shock waves he releases, a single foot-stomp can deplete more than half of Sora's HP. The suggested magic spells to use in this battle are: Curaga and Aeroga.

However, a somewhat faster plan is to equip a powerful Keyblade (such as Lionheart, Oblivion, or Ultima Weapon), and repeatedly hammer the legs with Ars Arcanum or Sonic Blade until he falls down. Then, just keep using Ars Arcanum on the heads, as it will deal a large amount of damage. Using this method, the only magic you really need is Curaga. However, if you use Aero, he will take damage simply by you being near him.

Note- that each hit taken by the Rock Titan gives you 1 Tech Point, thus you have an option of returning to the battle with the Rock Titan to level up quickly.

The Rock Titan has few attacks, and they are also not used very often. The first one consists of a ground attack in which he lifts his hands and pounds the ground releasing a large shockwave that can be easily evaded by jumping. The second attack, similar to the first, consists in the Titan lifting one of his feet and stomping it down.

The last (and most powerful) attack appears when he's knocked on the ground and Sora gets the chance to attack his heads; with biting similar to Cerberus's, the Titan tries to keep Sora's attacks at bay. 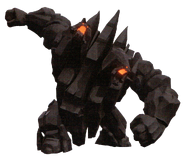 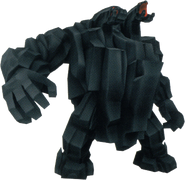 The Rock Titan was an original creation for the 1997 Disney film Hercules. He is based off the element Earth and meant to represent the Titans of Greek Mythology.