Don't let this dog have its day! Defeat it before it has a chance to use its paralyzing attacks.

Small and canine in appearance, these Heartless wander aimlessly until a target draws near.
Their bark is bad, but not worse than their bite; they'll snap at you if you hit them. Deflect this attack with a block to stagger them.

It won't move until approached, so move in swiftly and attack.
It becomes tired and lets its guard down after counterattacks. Attack then for an easy battle.
Snapper Dog
Bully Dog
Raging Reindeer
Rush Sheep

A Rabid Dog resembles a small, blue dog with a massive head and an equally massive, toothed maw. Its ears are long, stand on end, and curl at the tips. It has a crooked, blue tail and four short legs with no discernible digits on its paws. Its long, pink tongue is often seen hanging out of its mouth. The Rabid Dog's large, yellow eyes each sport a black spiral pattern. It also wears a large, red collar with several conical, silver spikes on it, though, because of the Heartless's size, it is worn around its waist instead of its neck. Its Heartless emblem is on its rear.

In Kingdom Hearts II Final Mix, the Rabid Dog's body is dark red in color, its mouth is lavender on the inside, and the black spirals in its eyes are red. Its collar is yellow and the spikes on it are lavender.

The Rabid Dog's name references the fact that it resembles a real-world dog. It also references rabies, an illness that induces manic behavior, which its Japanese name, "Mad Dog", also references. Dogs are more responsible for transferring the virus to humans than any other animal. In Kingdom Hearts 358/2 Days, it is known as "Bad Dog", which holds a similar meaning.

Rabid Dogs are one of the more harmless enemies, but they tend to appear in packs. Most of the time, they will do nothing, falling asleep from time to time.

However, sometimes they may bark, which causes a sound wave, dealing a large amount of damage, especially on low levels. However, they have low defense, and can be defeated easily. 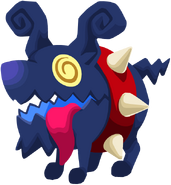