The Pride Lands, despite the name, pertains to the three main parts of Africa that Simba explored during the events of The Lion King and seems to correspond with the later events in the film. The setting includes the Pride Lands itself, as well as more famous movie sites such as the Jungle, and the Elephant Graveyard.

The Pride Lands was originally going to appear in Kingdom Hearts, but was removed due to time constraints; programming Sora's four-legged movements and fighting style proved too much for the game system to handle. Jiminy Cricket does mention the world in his Simba entry in his journal in Kingdom Hearts.

Sora and company enter at the Gorge and discover their new forms, which take some getting used to. The only exit out of the Gorge takes them to the Elephant Graveyard, later the site of a complicated hyena takedown. Going out the other end of the Elephant Graveyard takes the party to the dried up, dying Savannah, which serves as the world's main junction.

Going north through the Savannah takes Sora and the party to the famous Pride Rock, which can be seen in the distance. A small entrance at the base takes them to Rafiki's hideout, the Stone Hollow, while going in the entrance at the top of the rock leads to The King's Den, and eventually Pride Rock's Peak, which is transformed into Scar's Darkness while Scar is fought. After the second visit to the Pride Lands, a massive swarm of Rapid Thrusters can be found here. This is a good place for Level Grinding

Towards the southeast of the Savannah lurks the entrance to another set of areas. Wildbeast Valley is the first of these, full of giant rocks and loads of Heartless. Further on is a twisty, curving path through the Wastelands; a pleasant change of scenery comes at the end of the Wastelands at the entrance to the Jungle. It is in these areas that a change of day can be noticed by the changing from day to night. Finally, the path through the Jungle takes the party to the Oasis, home of Timon and Pumbaa, as well as the world's Moogle shop.

Prior to the events of Kingdom Hearts, Pride Lands was destroyed by the Heartless, but Simba's strong heart refused to languish in darkness, keeping his spirit alive and turning him into a Summon Gem, Earthshine. After Sora defeats Ansem, Seeker of Darkness and seals Kingdom Hearts, the world was eventually restored to its original place and returned to the Realm of Light.

Shortly before Sora and company's visit, Simba has a nightmare of his father's death.

When Sora, Donald, and Goofy arrive, in their forms of African animals, they realize that they have landed in the property of the hyenas and almost become dinner to Shenzi, Banzai, and Ed, however, they hear a roar from Scar, and so leave them alone. In the Elephant Graveyard, Sora and the others run into Nala who is being targeted by Heartless and come to her aid.

They follow Nala to Pride Rock where they ask the shaman Rafiki if they have the right qualities to go up against Scar and become the next king. Right after Rafiki says they are not qualified, much to Sora's dismay, they are surrounded by hyenas and Scar, and Pete in lion form. With some help from Nala, they manage to escape with their flesh still intact.

Sora asks Nala if they have anyone else who may have the right qualities to become the new king of Pride Land. Nala mentions to them that only the son of Mufasa, the last king, could be qualified to go up against Scar, but she also tells them that he died when he was a cub. Because Sora and the others knew Simba from their last journey, they tell her that Simba is alive and well, and so wander around the world of the Pride Lands to find him.

Sora, Donald, Goofy, and Nala reunite with Simba in the Oasis and befriend his best pals, Timon and Pumbaa. Nala tries to talk Simba into going back to Pride Rock so that he could take his place as the king of the Pride Land, but he refuses. The same night, Simba looks up to the sky and remembers what his father told him about the past kings of Pride Lands will always be in the sky to guide him as stars. He then tries to call out to his father, and Mufasa appears right in front of him and convinces him to take his rightful place. After talking to his father, Simba tells his friends that he will return to Pride Rock to face his past. Then, the sun rises up behind him.

Simba comes back to Pride Rock and challenges Scar, but Scar reminds him of Mufasa's death and claims that Simba is his own father's killer, which lands him into despair. When he is about to fall from the edge of Pride Rock, Scar tells him that he was the one who killed his father and not Simba. Knowing that it's not his fault and angered by his words, Simba jumps up from the edge and lands on Scar, who confesses his crime to the others on Simba's command. Right after he confessed, the hyenas make their move on Simba and Scar runs up to the peak.

After Sora, Donald, and Goofy chase away the hyenas from Timon and Pumbaa, they make their way to the peak and watch the fight between Simba and Scar. Simba manages to push Scar off the cliff, but then Scar climbs back up and has his body filled with dark energy, and Pete states that he has become a Heartless and will rule the Pride Land as the land of Darkness. Sora, Simba, Donald and Goofy then join forces and defeat Scar, and Simba is ascended as the new king of the Pride Land. Mufasa's star appears in the sky and reveals a keyhole for Sora to open up so that he can continue his journey.

During Sora and co's second visit, they find out that the kingdom is being haunted by the ghost of Scar and go to Pride Rock to ask Simba of the matter. A lioness there tells them that Scar's ghost is an omen of the end of their pride, and that Simba is not as qualified as they had hoped. Sora and the others visit Simba, whose heart is troubled by the ignorance of what his father would've done as king, but they manage to convince him that he needs to do things his own ways instead of following his father's footsteps. They visit Rafiki to ask him about Scar's ghost, but all he gives is that Simba is going through a test and that he needs to find the strength to go up against his own fears before he could become the real king.

Sora, Simba and co come to the Elephant Graveyard to visit the three hyenas. After they catch them, they ask them about the ghost of Scar. Just then, Scar appears in front of them and Simba becomes so troubled by his heart that he runs for the hills.

Sora, Donald and Goofy then return to Pride Rock and have a talk with Rafiki and Nala. Rafiki tells them what Simba needs to do is figure out how to do things his own ways instead of letting others tell him to.

Knowing where Simba might be, Sora, Donald and Goofy go to the Oasis where they find him endangered by Scar's ghost and come to his rescue. Though they try to make Simba realize that he needs to find his own path, he still hesitates. Sora and the others then pretend to leave and, with Donald's magic, conjure up a fake ghost of Scar and provoke Simba much enough to make him realize that he has something his father didn't; those who stand close beside him. Just then, Timon arrives and tells them that Scar's ghost is haunting the Pride Lands and Nala is in danger.

Simba, Timon, Sora, Donald and Goofy make their way back to Pride Rock and Simba scares away Scar's ghost. A large number of Scar's ghosts fuse together to form a gigantic Heartless, and Sora, Donald, Goofy and Simba join forces to defeat it, although only Sora and Simba take part in the battle. Afterwards, peace is restored to the Pride Land. When Simba asks Sora if his quest will ever be over, Rafiki tells him that the battle will never end but also tells him as long as his heart remains strong, he will succeed to come pass any problem. Then Sora, Donald and Goofy leave the Pride Land to further their journey and their endless battle.

Some time after Xemnas's defeat, Rafiki shows the newborn cub (Kiara) of Simba and Nala to the animal kingdom atop Pride Rock. As he does so, the Pride Lands return to the lush savanna paradise they once were.

While visiting Pride Lands, Sora, Donald, Goofy, and Pete change their forms into the forms of animals native to Africa in order to blend in with the rest of the cast. While Donald, Goofy, and Pete still have their original facial features, Sora's appearance changes more so. Sora is transformed into a lion cub, Donald into a hornbill, Goofy turns into an African spurred tortoise. Because of this, Sora cannot use any of his Drive Forms, Summons, and Limits used with Donald and Goofy. Pete is also transformed into a tubby, dark gray colored lion while visiting this world.

Sora as a lion cub. 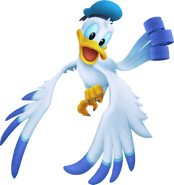 Donald as a bird. 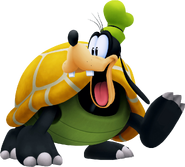 Goofy as a tortoise. 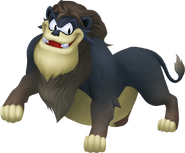 Pete as a lion.