View source
watch 02:23
Wiki Targeted (Games)
Do you like this video?
Play Sound

This fog-like fiend travels in a herd and inflicts status ailments like poison. Clear the air with an all-encompassing attack or special attack!

Possessor
These Pureblood Heartless are slow and generally weak, but can engulf targets and drain their life.
Jump free to escape their capture.

Possessor
A Heartless that appeared in Beast's Castle. It possessed the dungeon doors, turning it into Thresholder.
It had the power to conceal itself, but had very few other powers.

Thresholder
The doors possessed by Possessor that attacked Sora and his friends.
Possessor was separated from the doors with Release, in which the power of the Keyblade was poured into the keyhole blocked by its arms.
Massive Possessor
Possessors
Pink Possessor
Cloudy Sunrise

The Possessor is a simple, gaseous creature that bears some resemblance to the Darkball Heartless, sporting a similar, jagged mouth—albeit the Possessor's is red—and glowing, yellow eyes. It is seemingly made up of black and dark blue and purple shadows.

The Thresholder is made up of two ornate statues carved into a grey, hexagonal doorway. Each statue has one arm "trapped" in the door, though their claws are seemingly grasping the gold lock in the center of the door from the other side. Each statue on the Thresholder takes the form of a muscular, black-skinned demon with a thin, jagged mouth, spherical head, and beady, glowing yellow eyes, similar to a typical Heartless.

Its chest, exposed arm, and each of its short, pyramidal horns sport a jagged, yellow pattern decorating them. Each wears a green collar with four short, silver spikes on it, and their hands end in three red claws. Their backs are lined by short spikes, and their lower bodies are actually curled, interweaving tails with yellow tips. Their lower and upper bodies are divided by a thick, sky blue "belt".

In Kingdom Hearts II Final Mix, their appearance drastically changed. The Thresholder statues have lilac bodies, while their horns, head, arms, belts and chests are dark indigo. Their claws are yellow and their collars are now violet. The door is now black and the lock is cyan.

In Kingdom Hearts 358/2 Days, as long as Roxas is touching them, his health will be continuously depleted. Jumping or performing Dodge Roll will help Roxas escape its capture. Its 'attack' is nil-based, so having Nothing to Fear equipped will prevent Roxas from taking damage.

When you first enter the Undercroft, you will encounter Gargoyle Knights. After they are defeated, move towards the Thresholder. Hook Bats will arrive to defend it. After you defeat a second wave of Hook Bats you are clear to attack Thresholder. The Thresholder will attack by extending its arms across the room and summoning orbs of darkness, so try to avoid those. When his health depletes to a certain point, you can now use the unlock reaction command to release Possessor from the door. Possessor has no form of attack whatsoever, so you're free to go on the offensive.

Eventually it will float back to the door and reanimate it. Thresholder then starts to shoot projectiles at you. Move in close to attack Thresholder without being hit. After you deplete its health again, Possessor comes out and floats around again. Eventually, it will extend its arms at full length, cross them over, and continuously slap you. When its health is gone, you have defeated both bosses. If Sora dies in this fight, The King is temporarily playable. 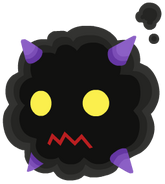 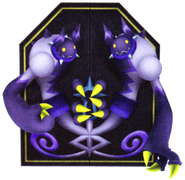 Heartless
Community content is available under CC-BY-SA unless otherwise noted.