Ghostlike Heartless who haunted the clock tower standing far away from Neverland. Fluttering his eerie cloak, he cast a spell to take Sora's heart. Having no physical body, regular attacks were useless, but in the end Sora and company discovered his weakness and prevailed.

The Phantom is an Emblem Heartless that can be found exclusively as a boss in Kingdom Hearts.

The Phantom wears a long, tattered, black cloak with long sleeves that gradates into a light aqua color from the waist down. It has a long, pointed hood and it doesn’t seem to have a face or body of any kind. Only its clawed, five-fingered hands are visible, but even they seem to be wrapped in the cloak.

The apparent source of its power is an orb that contains its heart in the lower section of the cloak. This orb glows in a different color—red, blue, yellow, and white—depending on the type of attack it is currently vulnerable to. The orb can also disappear entirely for short periods of time. The Heartless emblem is displayed on its back.

In Kingdom Hearts Final Mix, the Phantom is largely unchanged, though its cloak is now predominantly white with black sleeves decorated by a flame-like pattern.

The Phantom is physically similar to the description of Lord Ombra (minus the heart orb) from the book Peter and the Shadow Thieves, a continuation of the Peter Pan mythos published by Disney. Lord Ombra is also a character clad in a dark cloak with seemingly nothing under it.

The Phantom is one of the most powerful Heartless bosses in the series. It has many magical abilities to fight Sora and his allies. It mainly attacks by firing dark fireballs at enemies, and slashing them with his claws.

The Phantom is much like a moving and attacking version of Ursula's cauldron. Before this battle, ensure Goofy is in your party with the MP Gift ability equipped. Equip Sora with MP boosting equipment, and plenty of Ethers and Elixirs to ensure a plentiful MP supply.

The key to this battle is these abilities to all party members:

Cure maxed to Curaga, Aero maxed to Aeroga, Stop maxed to Stopra, all of those spells in the shortcut menu, and the item slots for Sora filled with Megalixirs.

Spellbinder is a very useful weapon that boosts MP and magic, which this battle focuses on.

The key to this is to ALWAYS stay by the clock face and continually cast Stopra. Depend on Donald to cast the attack magic, and Peter Pan to attack. Only attack with magic, if you have an abundance of MP, and he is near the clock face. DO NOT chase after him, as he will just float away and you won't get a hit.

The Phantom will only sustain damage when the glowing orb beneath it is visible. Even then, you will only be able to damage it in a specific way, determined by the color of the orb:

Each time the orb is hit, it will change color. Once struck three times, it will disappear.

Occasionally, the Phantom will fire an energy ball at Sora. If hit by this, he will sustain damage up to five times. This can be avoided by flying around to the Clock Tower, using Aerora/Aeroga, or by hitting the energy ball, which will vanish if done so. Phantom can also perform a short-range, high damage slashing combo with his claws, though this is not as dangerous as his other attacks.

For the whole battle, the Phantom will use an attack with a similar effect as Doom from the Final Fantasy video game series, that works through the clock tower. If the counter (starting at 12) reaches 0, the character chosen cannot be revived for the remainder of that battle. Whenever the hands of the clock tower move forward five minutes, the number will drop by one.

This effect can be postponed by casting Stop on the clock that counts down, which in turn will pause the numbers floating over the head of the character inflicted with "Doom", for one minute real time. Peter Pan is always the first victim. As the curse cannot be lifted, Sora's allies will be eliminated from the battle, one by one, ending finally with Sora, so defeating it quickly is of the essence. The Phantom seems to recast Doom much faster in Final Mix. No Summons can be used in this battle since the Doom spell affects the whole party.

Following your victory, your Stop magic will be upgraded. 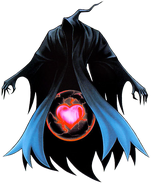