Pegasus is of a free-spirited personality and will neigh whenever he wants to express his feelings. For the most part, Pegasus's personality reflects his master's feelings. For instance, if Hercules is angry, Pegasus will glare and shake his head at whomever the person is. Pegasus has a carefree, optimistic spirit when he is around his friends. For villains like Hades, Pegasus takes an immediate dislike and will express it through glares and head shaking.

Pegasus is a pure white horse with light tan hooves, a sky blue tail, and a sky blue mohawk-like crest of hair going from the top of his head to the bas of his neck. His eyes have light blue sclera. Pegasus has two long, white wings sprouting from his shoulders. The tips of the first few feathers on these wings are sky blue.

During Sora's first visit, Megara is captured by Hades and Sora and the others go off to rescue her while Hercules fights the Hydra at the Coliseum. When Meg is finally found, Pegasus takes her to safety. When they all return to the Coliseum, they find it destroyed by the Hydra, making Hercules fall into a depressed state.

During the battle against the Hydra, Pegasus helps Sora by letting him ride on his back to attack the Hydra's multiple heads. When various Reaction Commands appear while fighting Hydra, one of them will call Pegasus and he will come and bring Sora to the Hydra.

During Sora's second visit, Pegasus is only present to take Meg to safety after Hercules saves her from the river Styx and restores his confidence in the process. After Sora wins the Hades Paradox Cup, Pegasus kicks Hades, which sends the god flying across the Underdrome.

In the end credits, he is seen enjoying the view of the rebuilt Coliseum with the others.

Pegasus escorts Megara and Philoctetes to safety when Heartless attack Thebes, and later flies Hercules up to Olympus to help save his father.

This version of Pegasus originated in the Disney original movie Hercules (1997). Zeus created Pegasus from the clouds for Hercules, and, over time, he comes to be one of Hercules's greatest allies and friends. In one of Pegasus's appearances in the movie, when Hercules is rescuing Megara, Pegasus comes and helps Hercules by flying Megara away from danger.

In the traditional legends, Pegasus was a child of the gorgon Medusa, and in some versions, the sea god Poseidon. He erupted from Medusa's neck when she was slain and beheaded by Perseus. This version was not connected to the Hercules movie in any way. 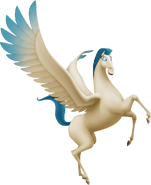